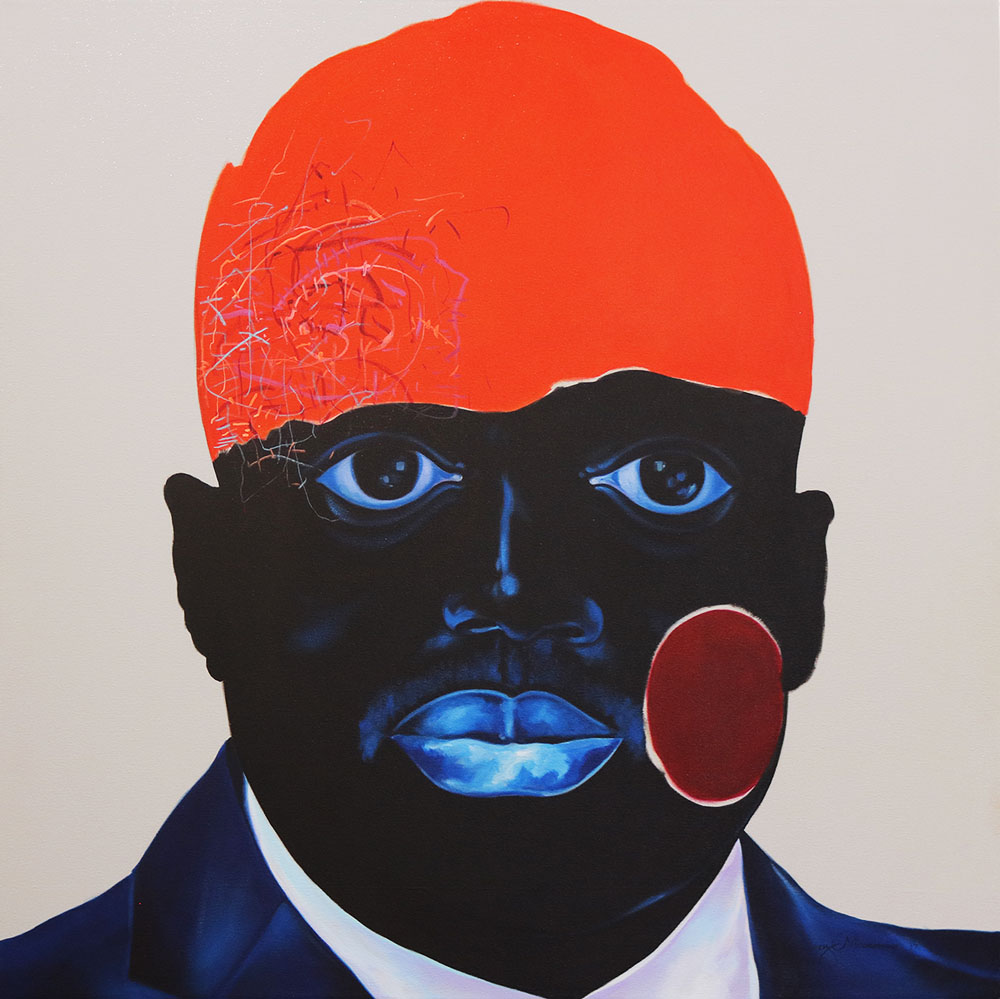 If ever the dryness of a language is felt, it is in the misused, overused and ideologically-motivated use of words such as “freedom”, “peace” and “humanity”. For these words, have been used for extreme political reasons as much as for sincere attempts to live up to such notions. In other words, one finds for example in the political speeches of even political figures of the far right maintaining that they are in search of freedom from oppression and peace. This skewed application has rendered such terms vacuous, even obsolete.

It is therefore heart-warming and tinged with hopeful optimism to find a correlate of these ideals in a language other than English, as if its provenance pre-dates the coolness of Latin, the high-discipline of the Romans and the hedonism of the ancient Greeks. While this is a simplification, the point is that we need new words to reclaim the inner soul of the vessel that are words. In this respect, consider “Ubuntu”, a term that refers inter-alia to a connectivity between people, a common humanity, a spirit of Africa that is universal and the potential for virtue, compassion and empathy.

“Uhuru”, a Swahili word is perhaps less well known, but in simple terms, refers to freedom, which may be interpreted as being no longer subject to colonial rule as well as a more abstract, personal sense of freedom from various encumbrances and limitations. While “Awethu”, perhaps more well known in a South African context as the rallying call after the powerful “Amandla” chant, refers to the fact that power is to reside with the people, that the rich and powerful need not decide the fate of the disenfranchised many.

Taken together how shall one interpret the mixture? Perhaps it is that a spirit of Ubuntu is achieved through a search for a certain African self-confidence, that with the use of such words one need not hanker after the European ideal and its philosophical heritage as the benchmark of both moral and even epistemological truth, that Africa has something to contribute – indeed to teach. In this respect, Africa is not “othered”. Following from this, freedom is achieved for if freedom is to mean anything, it is the capacity to intellectually determine one’s frame of reference; it is to define oneself with the use of one’s own concepts, no better explicated then in one’s own language. That is not to say the concept cannot be imported beyond that language, for a concept breaks the bonds of time and space in some respects, just as in the abstract concept of number. Finally, the freedom that is Uhuru gives way to a reclaiming of power by those often simply used by the system to entrench the system of commodities even further.

Now applied to art, perhaps we can say the following or ask the following questions: What new language can be found in visual terms to correspond to these concepts? Is there truly an art for the people or even by the people and can that be “read” by those outside of the game of art, without simply being a propaganda tool for socialism or the like? Africa is complex as is art, so I would suggest there is no overarching aesthetic. However, that should not deter African artists from finding a universal chord or harmony in their art – in new and exciting ways – that give colour to the terms, Ubuntu/Uhuru and Awethu.

Perhaps at the very bedrock for the possibility of freedom, peace and humanity is the simple acknowledgment across the spectrum of people, namely the recognition that one does not know the answers to the ultimate questions or even if the questions make sense at all. To ask these questions does not presuppose the opportunity for formal education, though that may  help. Perhaps this self-awareness/knowing then is the beginning of freedom from oppression and the true lived reality of humanity. 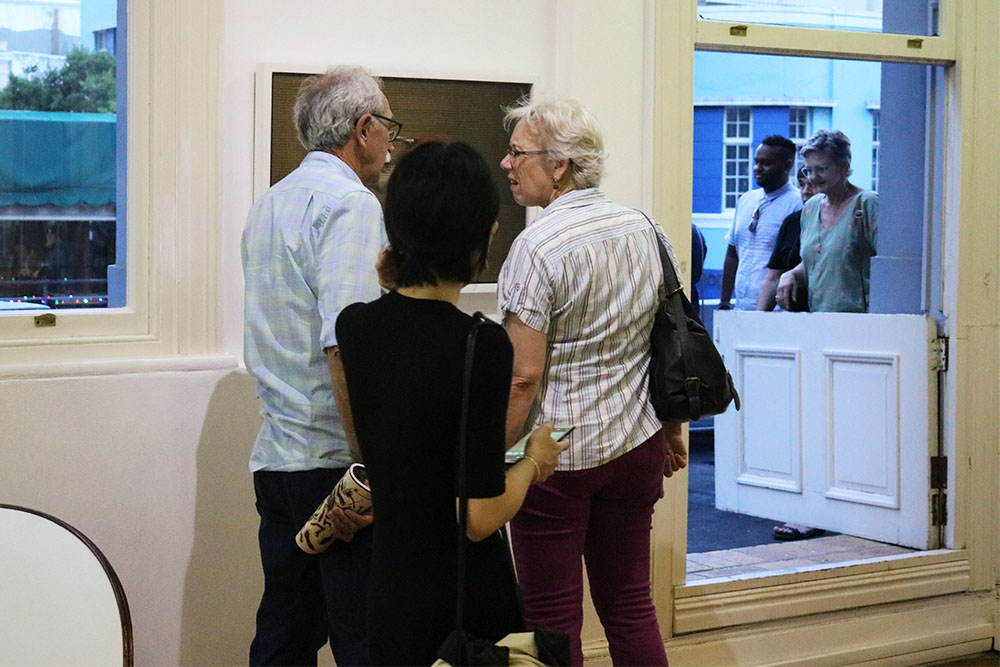 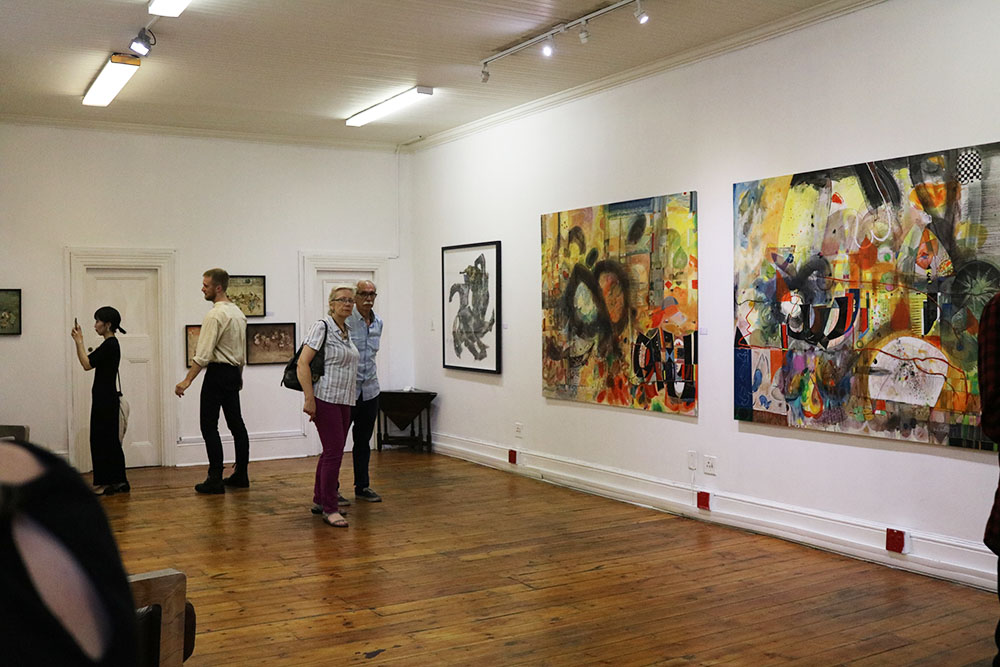 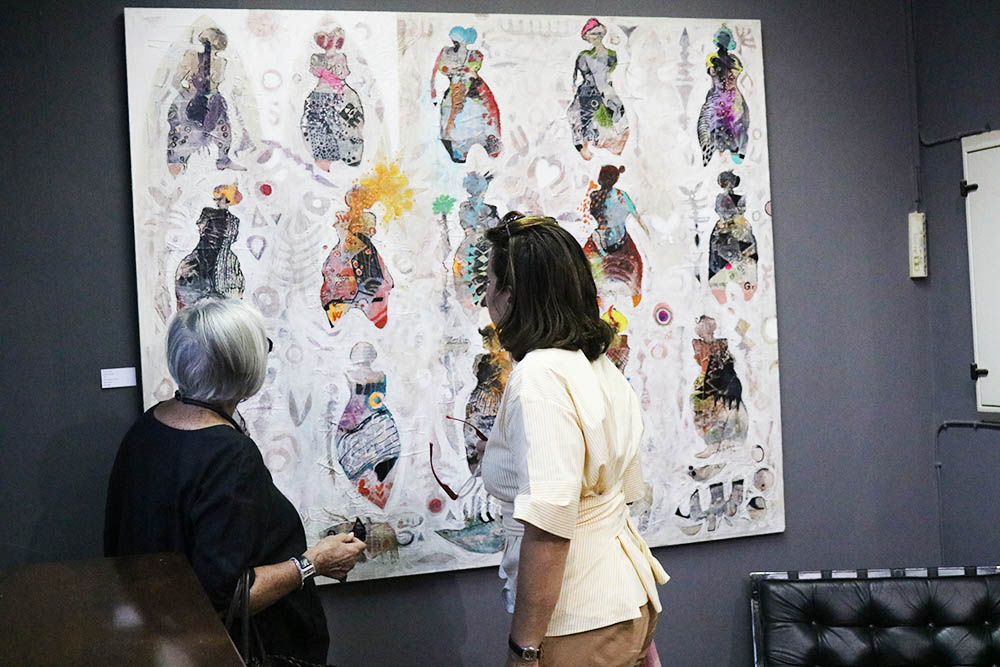 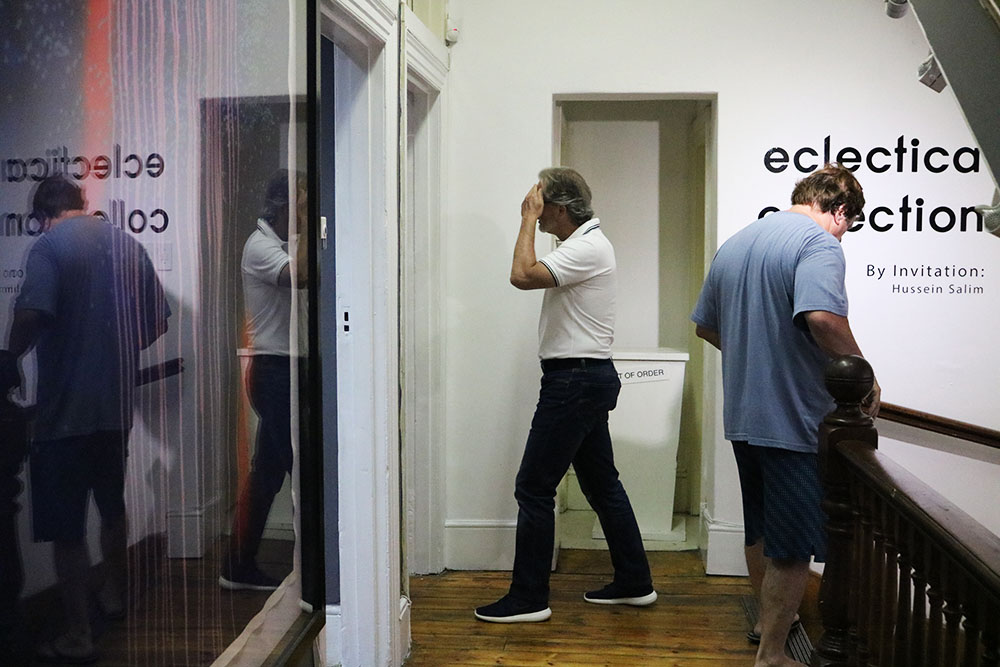 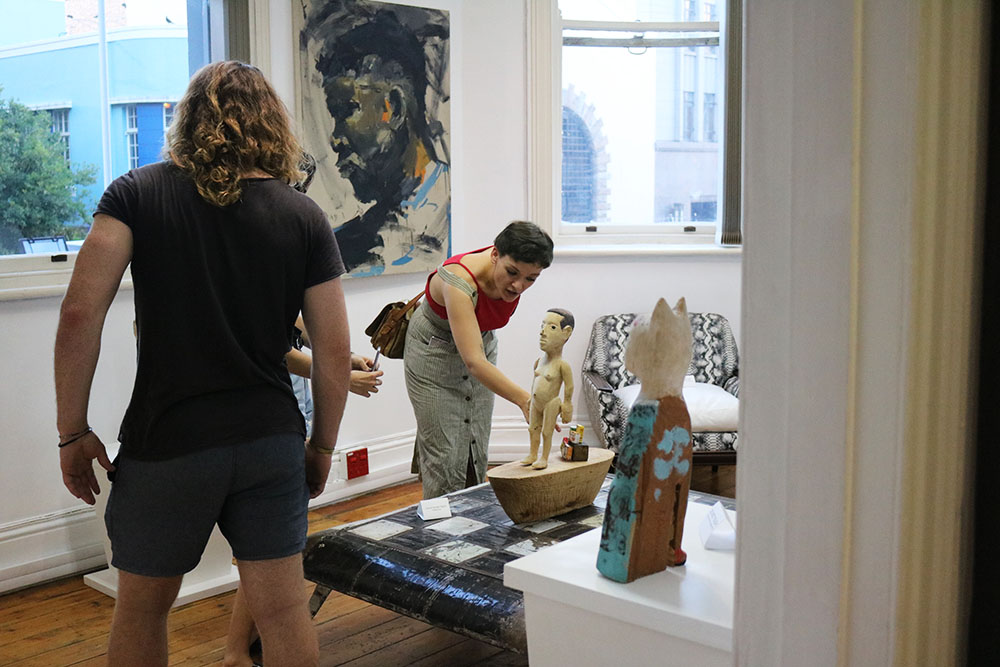 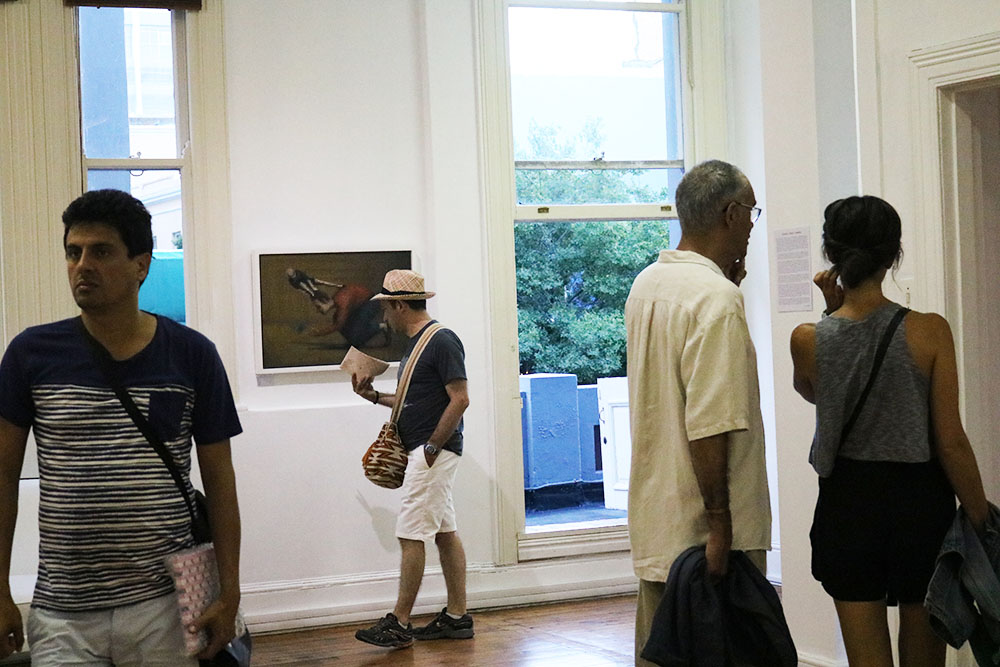 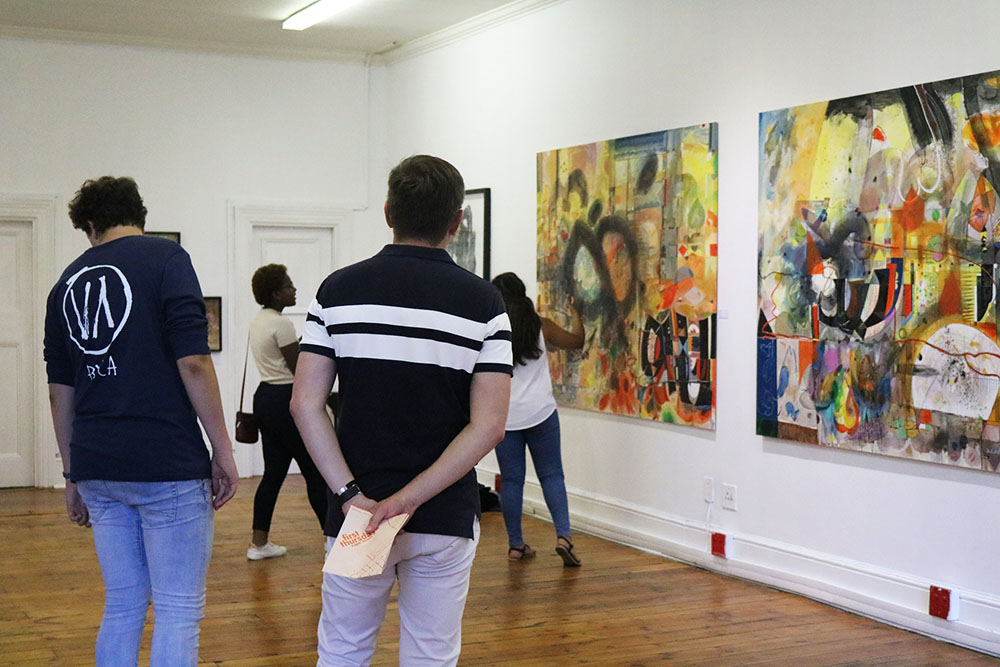 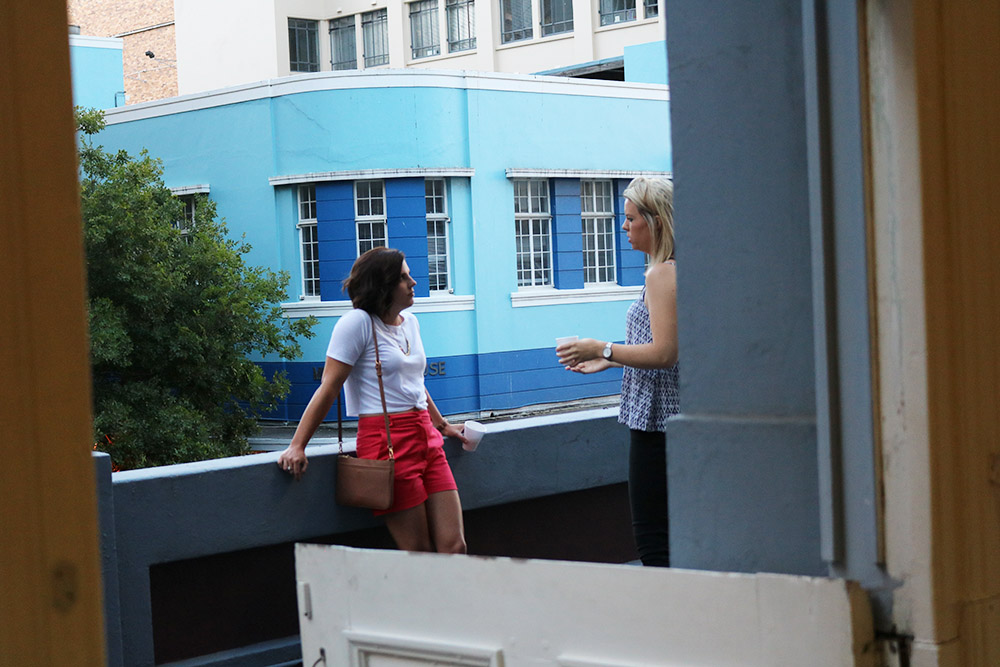 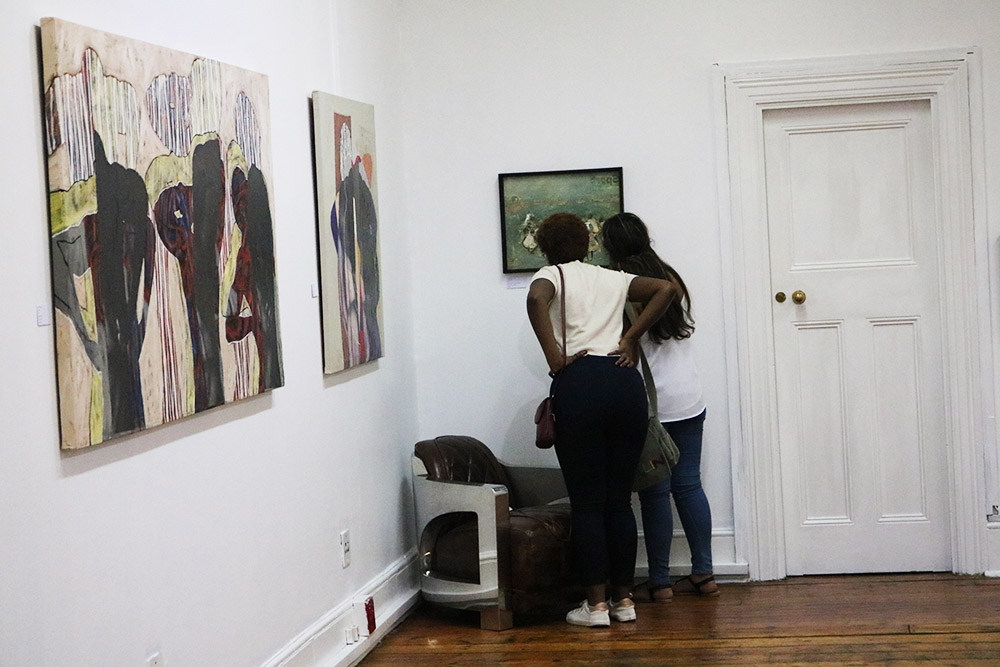 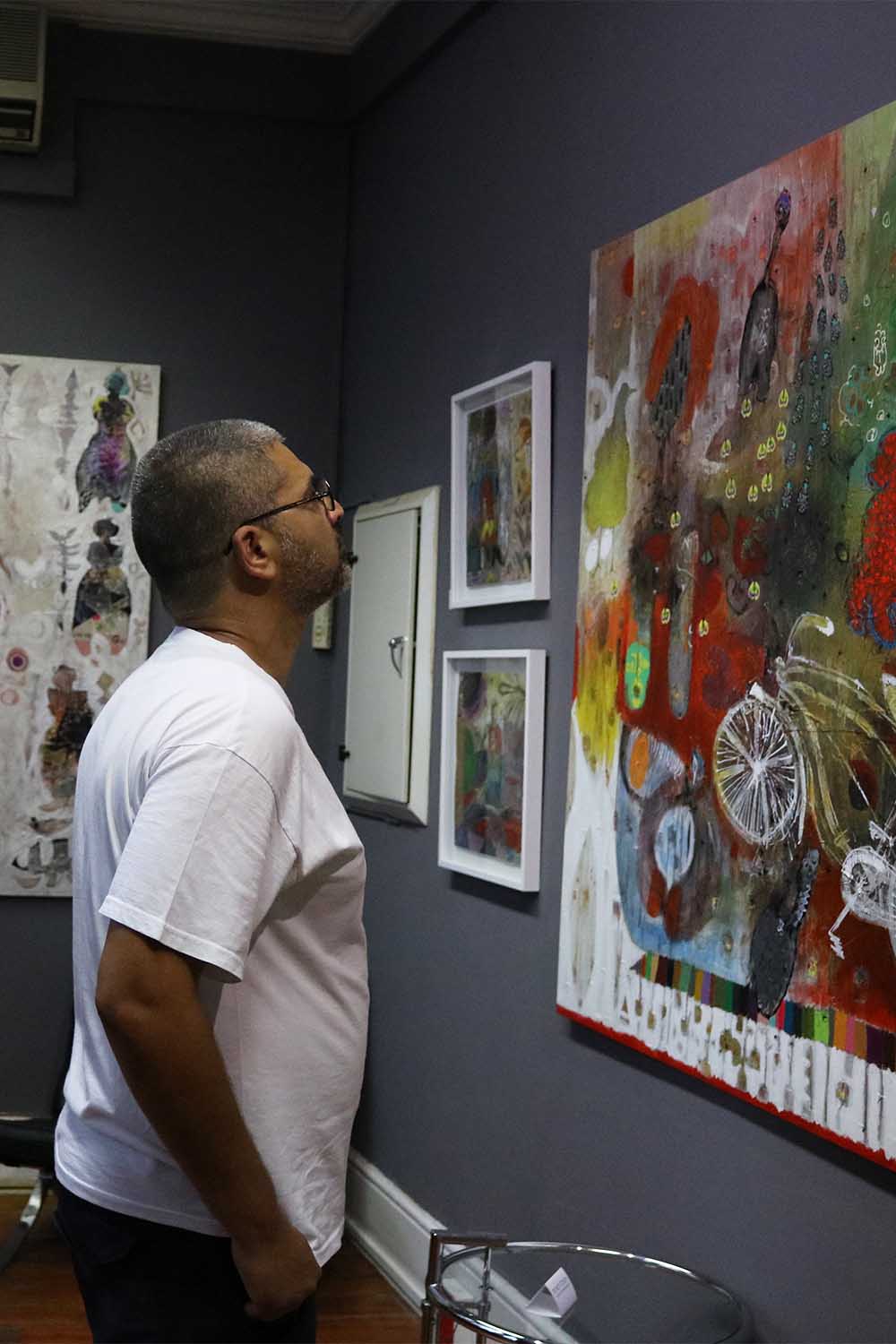 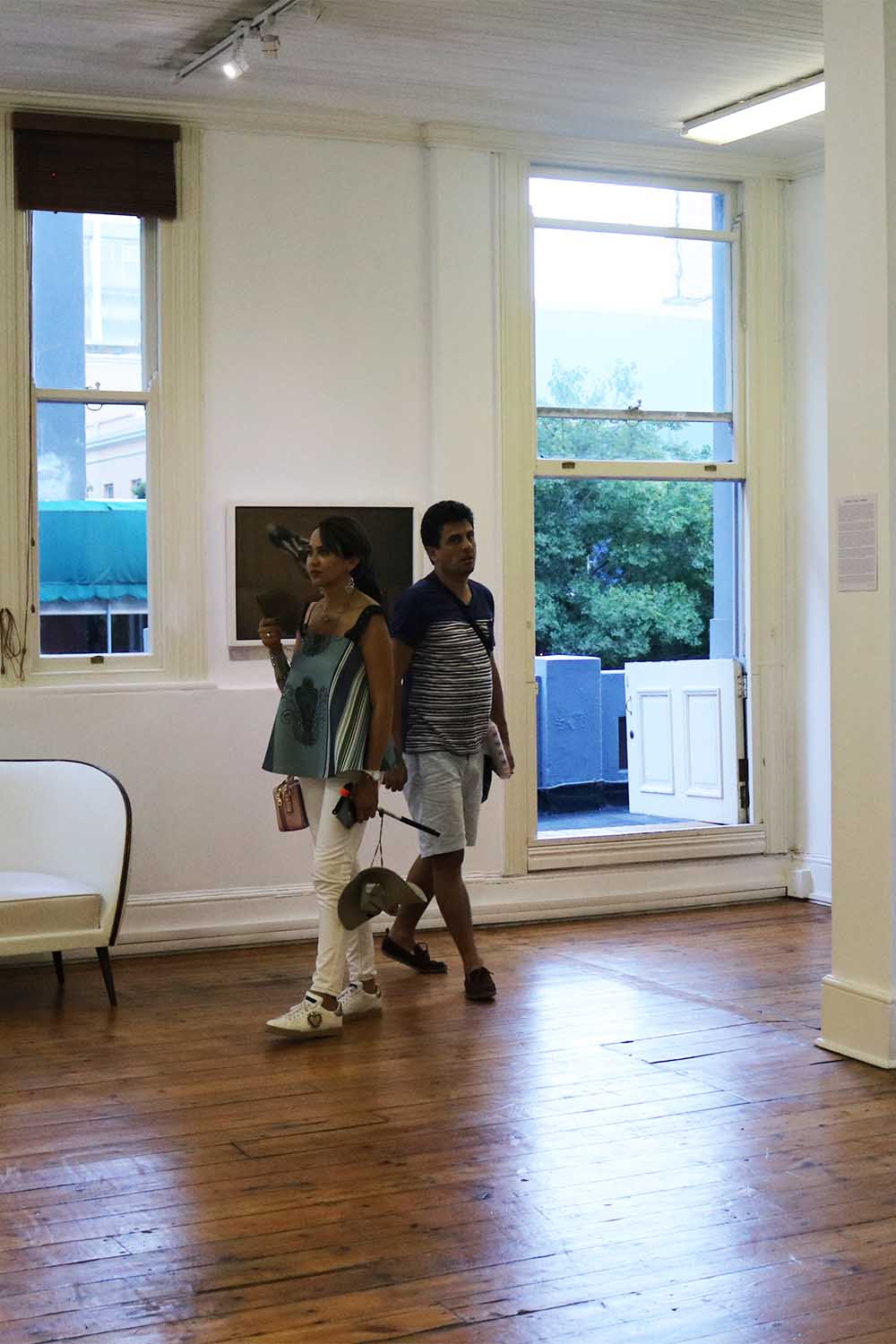 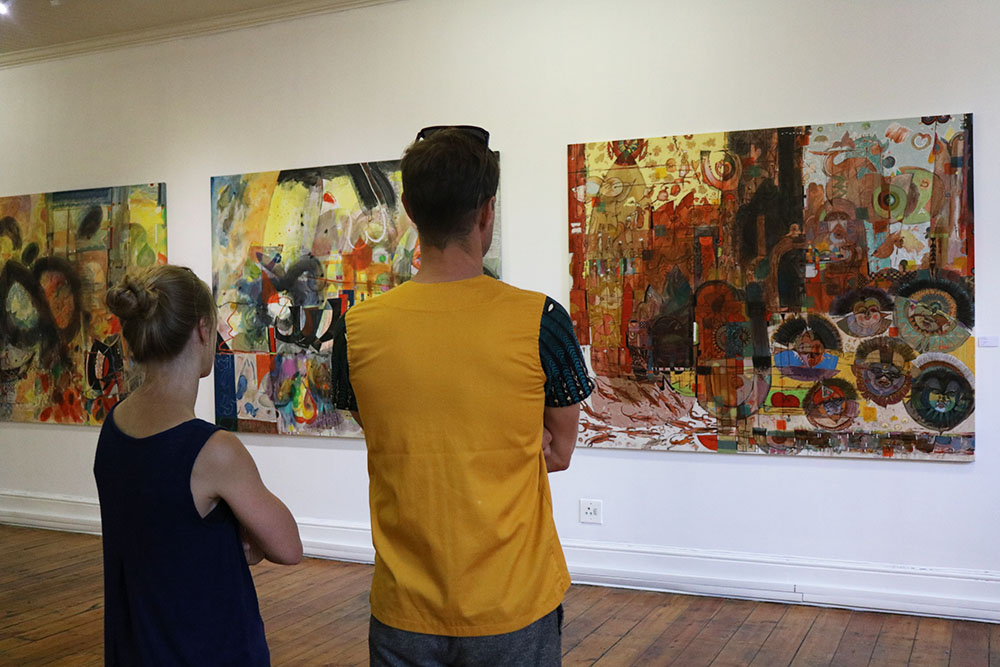 Ley Mboramwe hails from the Democratic Republic of Congo. He completed his degree in Fine Art at the ‘Academie des Beaux’ in Kinshasa (the centre of Africa). His life experience in the Congo, its suffering, beauty, politics, culture and economic circumstances is evident in his work.

Through his work he has tried to convey rhythm, emotion and freedom of the human spirit. His silhouetted figures are not only a representation of the physical self, but rather an amalgamation of flesh and spirit. The spirit as something in search of a tangible tether to land.

His work attempts embody a sacredness found in original rock paintings. Paintings, that for him represent a time when man was true and whole. It is also because of this he sees his work as a bridge between spirit and earth.

The human body is used as a means of storytelling and a reflection of life. Where stories, such as looting, hunger, disease, nightmares, dreams and the joys of human existence are theoretically portrayed.

Gary Frier Qualified as a Graphic Designer at the Cape Peninsula University of Technology in 2004 and is currently working as a freelance artist. He also teaches art at Zonnebloem childrens art centre and Valkenburg Psychiatric hospital; As well as a local N.G.O. the Observatory Neighbourhood Afterschool programme which provides educational and cultural programmes for youth at risk.

“I believe that making art is a compulsive act of self expression that can only be realized through the collaborative act of creating and experiencing. Creating art for me is about constantly reflecting on my place in the reality. Using art to express a emotional and intellectual and tactile value, discovering how to distill and interpret my interaction with what surrounds me and documenting that personal relationship.” – Gary Frier

Michael Selekane was born in Uitvlag, Mpumalanga. After moving to Mopbane with his mother in 1991, Michael’s artistic journey began to take shape. In 2007, he became part of the Ifa Lethu Foundation, allowing him to continue his artistic growth before graduating from the Tshwane University of Technology (Faculty of Arts).

Michael Selekane’s artistic practice explores an interesting passage of time through gestural mark-making where arguably past and present overlap. He explores the terrain of the destruction and construction of paradise, by negotiating a time of severe unrest in Africa’s history 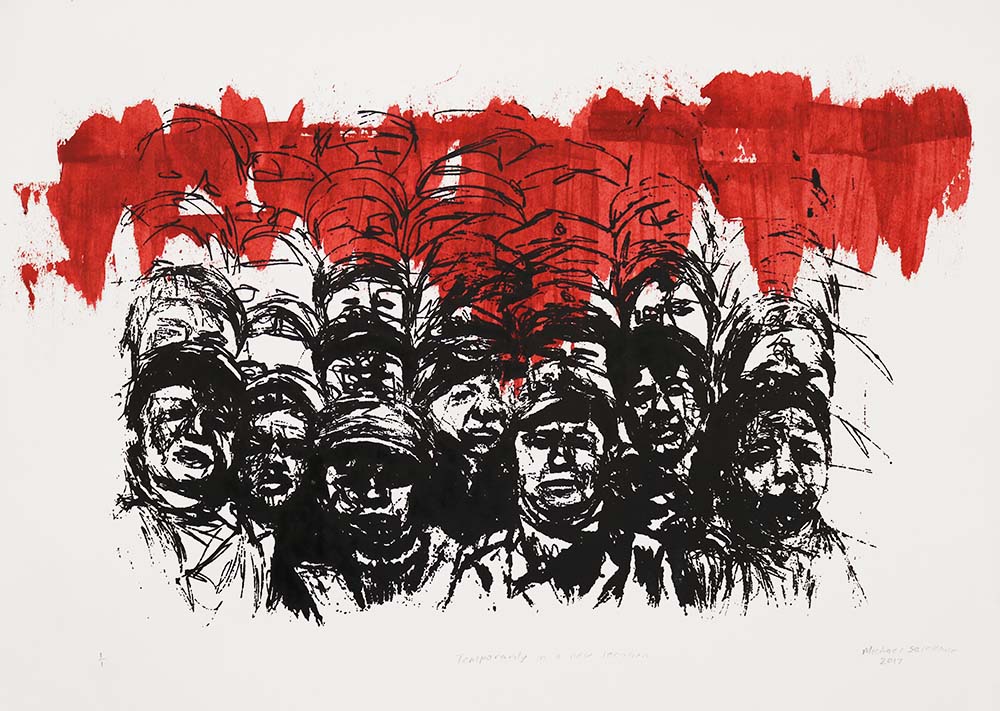 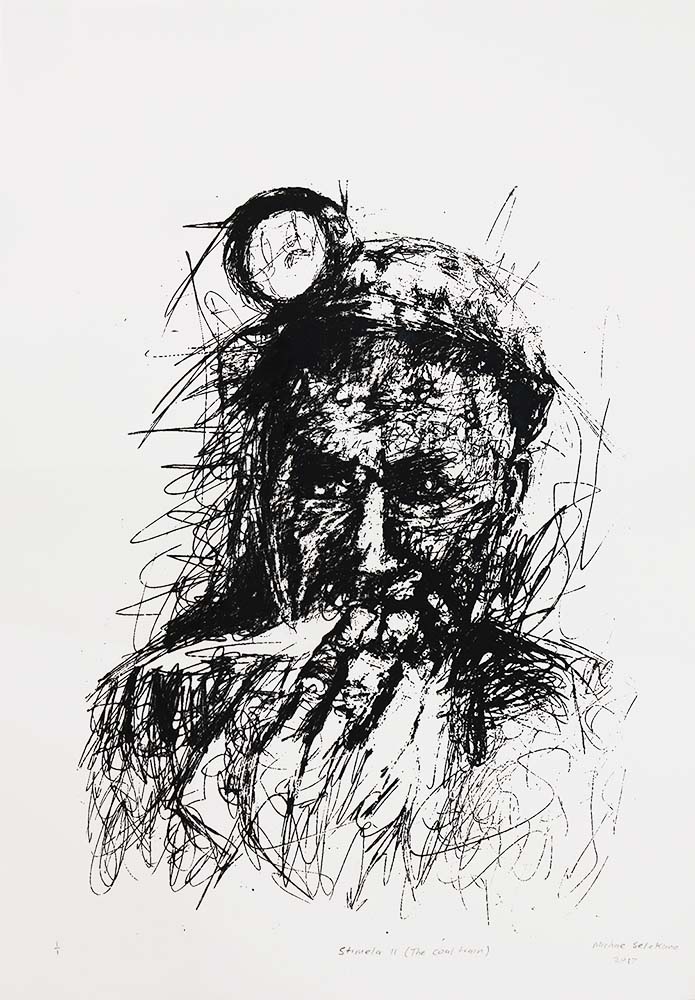 Thonton Kabeya was born in the Democratic Republic of Congo in 1983. In 2014, Thonton moved to Johannesberg where he now lives and works. His body of work is activated by the aspect of time and the persistence of memory.

Thonton recreates visual paradises, through rich colour palettes that trace intimate landscapes intrinsic to the artist’s childhood experiences. No longer rich in tangibility, yet still evocative, Thonton divulges the transience of paradise eminent in sensation but no longer concrete in form.

“Despite the passage of almost 25 years since my childhood, the memories of coming together with my friends in the evening to share the joy and energy of our youth is still powerfully evocative, and I am easily captivated by my reminiscence into my younger years. Our lives were playgrounds, filled with possibilities, and dreams of our youth. These works were created in celebration of these memories.

Just as children play, I have used the rich colour palette to mimic a musical stave, where upon children dance and play, like musical notes, in the creation of rhythm and mobility in the song of youth and carefree childhood.”  – Thonton Kabeya 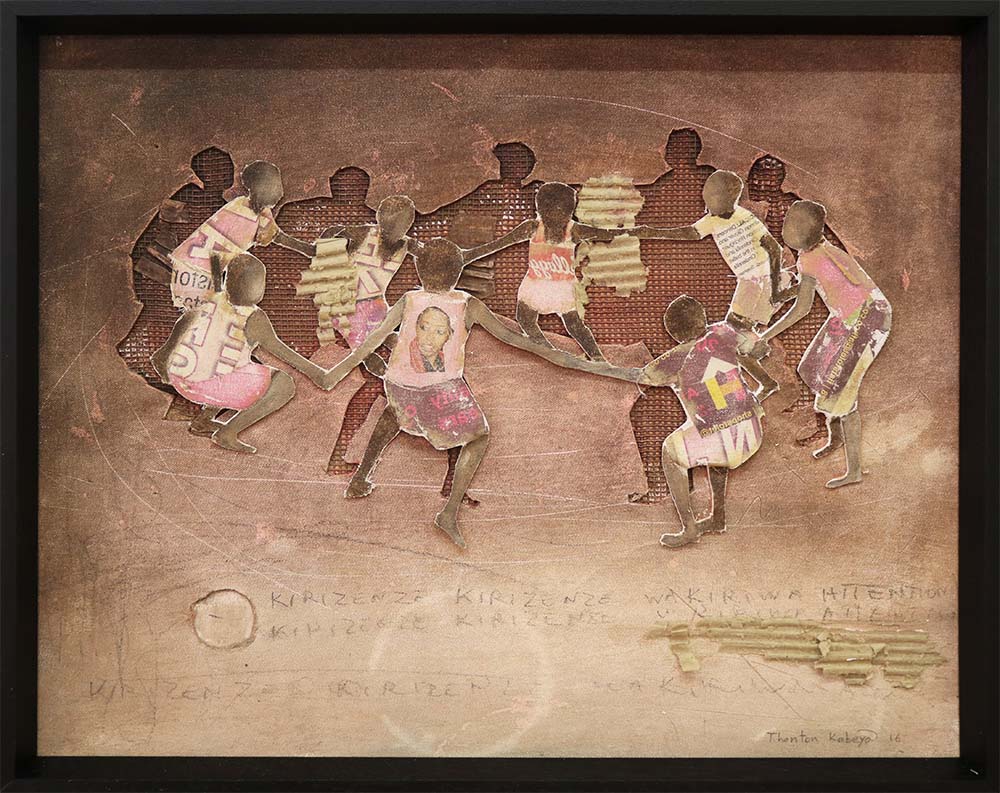 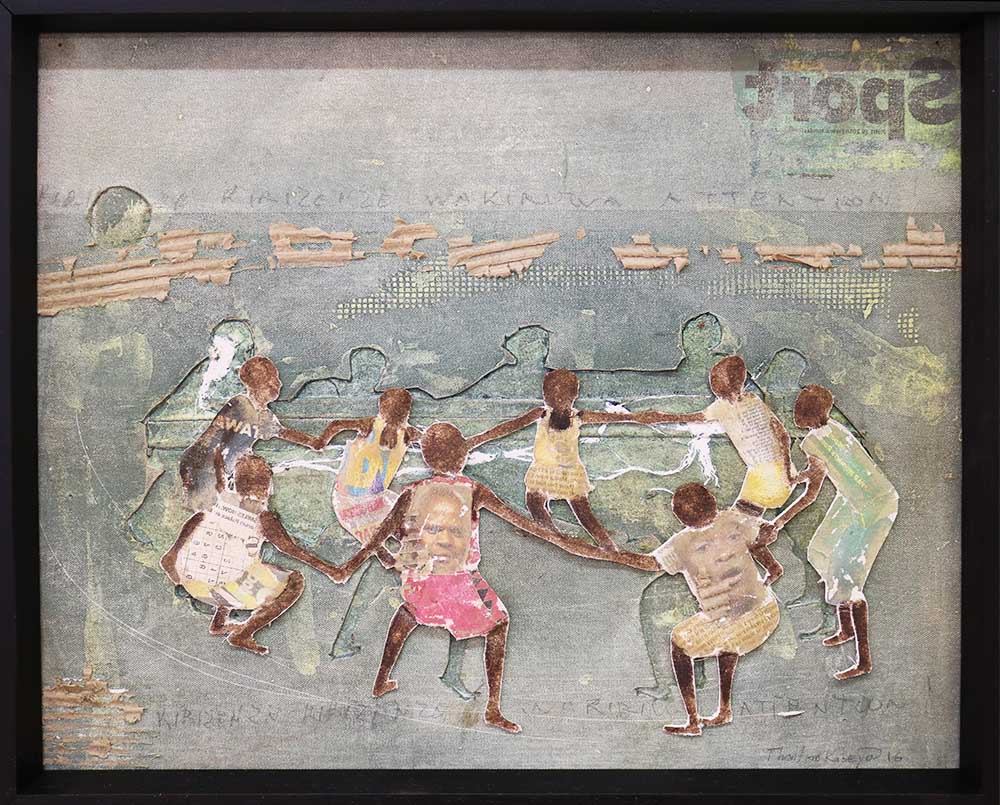 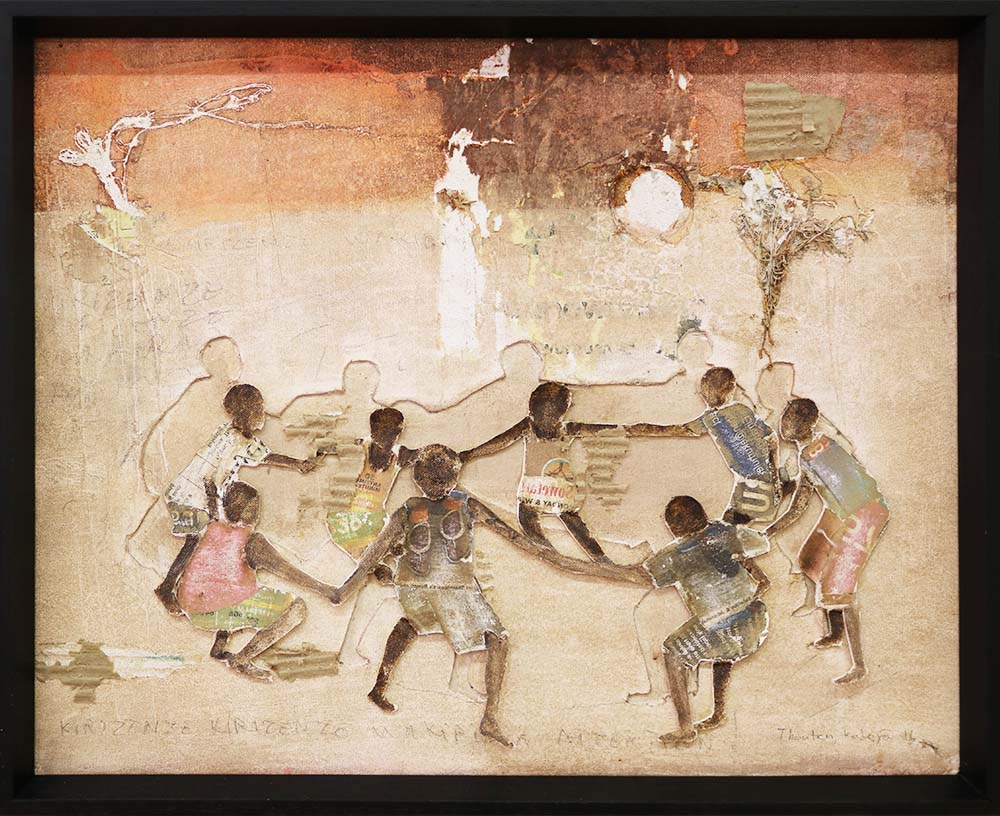 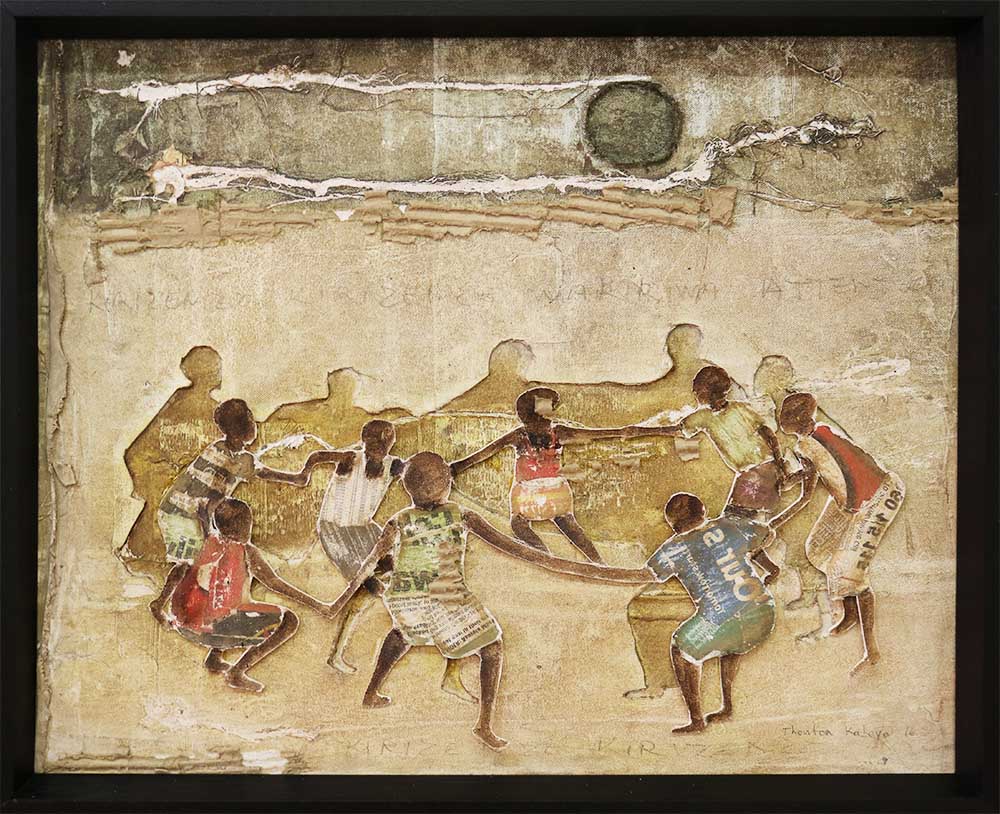 Collin Sekajugo is a Ugandan – Rwandan artist whose specializes in mixed-media artworks. He runs his personal artist studio in Kampala as well as an Arts space in Rwanda.

Most of his work see’s a combination of photography and painting. His process usually involves taking photographs he has captured and printing them, with waterproof ink, on a light cotton based material.

He then proceeds to collage this product on a canvas and combines it with paint to create a desired effect. Finally, he seals the artwork with a special paste. This acts as a fixative to protect the photograph’s ink against fading and scratching.

These work specifically speak simply of the notion of identity. This can be seen in the direct reference to the body within his photographs. Sekajugo, who refers to himself as a Ugandan – Rwandan artist, arguably attempts manifest this duel identity in the abstraction and juxstapositioning of the fractured, collaged imagery seen in his work. 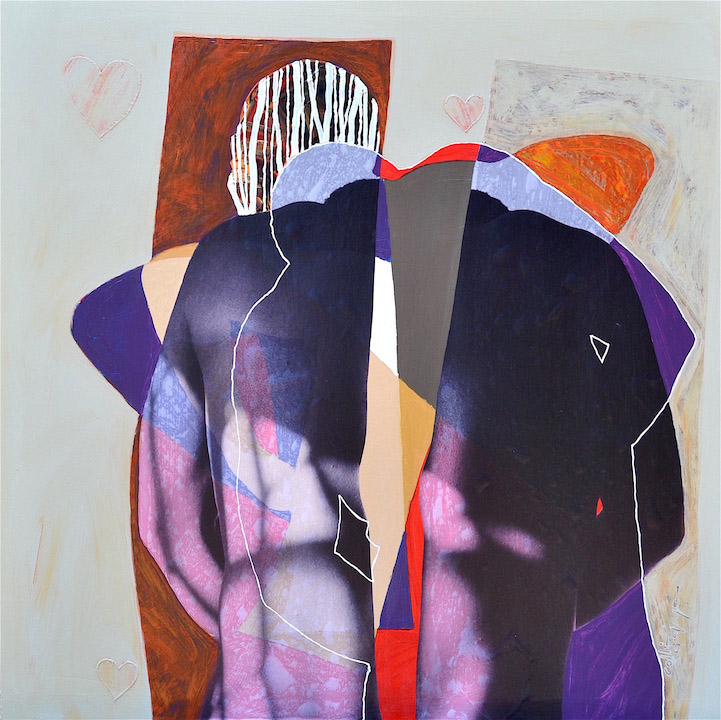 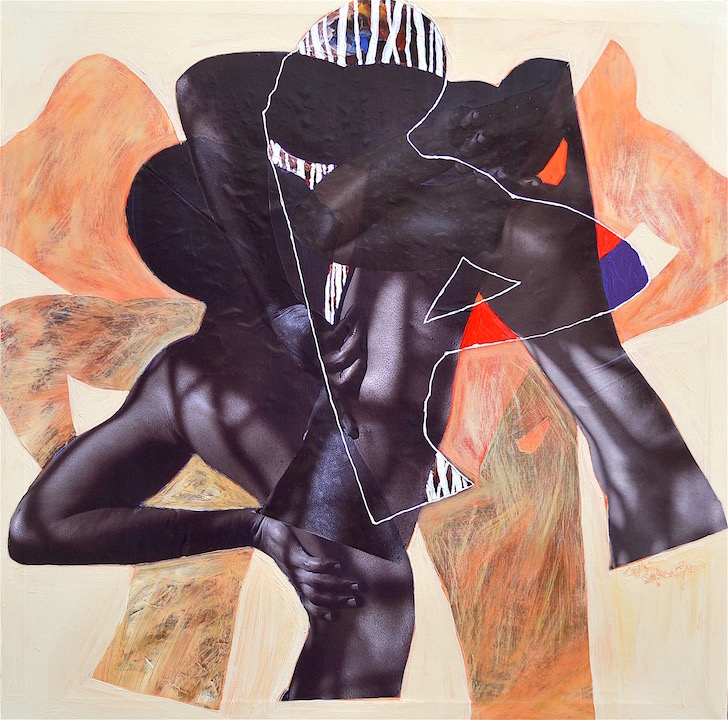 Albert Coertse is originally from Pretoria, where his studies commenced but now lives in Cape Town. Coertse holds qualifications in Communication Design attained at the Open Window Art Academy, Pretoria; Interactive Design at Malmö Högskola, Sweden and a Bachelors Degree in Industrial Design from the Cape Peninsula University of Technology.

Coertse is an artist whose paintings have evolved from figurative formations into abstraction with a focus on geometric composition and refracted landscape imagery. He specialises in oils on a variety of board. The distinctive style for which Coertse is known is illustrated in his use of linear-like grids.

In this work, we see him reverting back to a more figurative style. Arguably the grid composition gives the imagery a pixel-like quality creating an illusory sense of movement as one moves around the work. 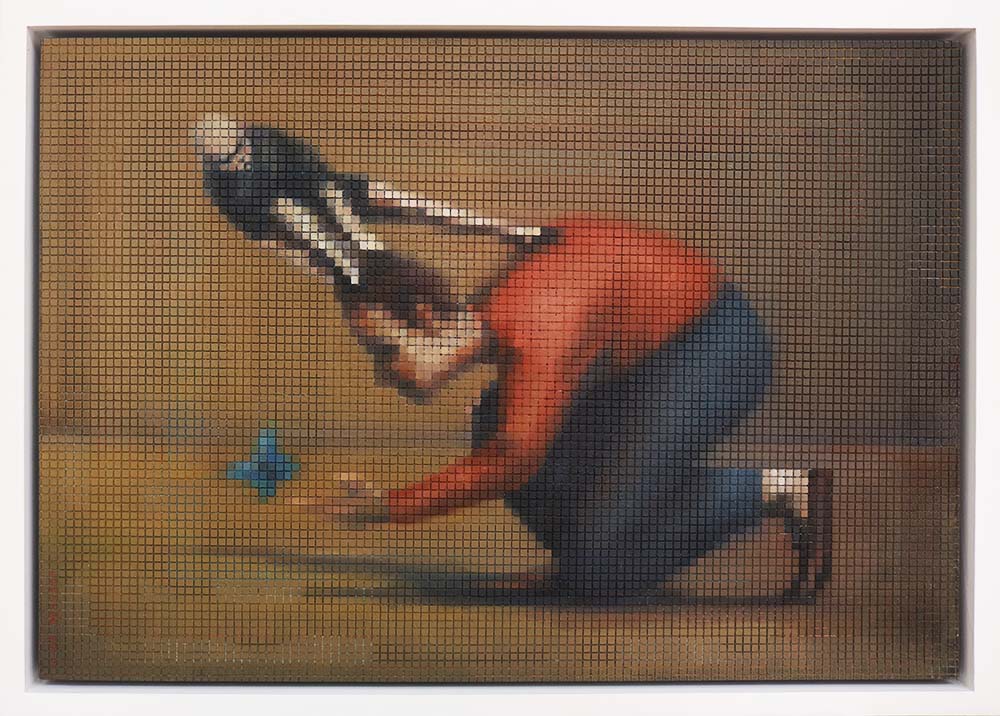 Born in Karim Sudan in 1966, Hussein Salim, found himself, along with other Sudanese artists and critics during the 1970s and 1980s conflict, exploring the dialogue between the importance of heritage and contemporary Sudanese art. Through his rich impasto paintings, Salim reflects this dialogue through the use of personal symbolism of his dual African and Islamic identity, and through this coalescence his work creates a personal conversation with the viewer of the effects of a diasporic background.

“As an Artist, expression has come to me as a matter of trying to grow the feeling and capturing the essence of the little things in life (the details) in their presence and their absence. My  aim was refreshing the memory of the viewer, about shifting environments and its people. My aim was to draw light to the tiny details that no one pays attention to.

It is always a process to fully create the replicas of my view of space, atmosphere and the “ins-and-outs” of these microcosms. It is so laborious for people to appreciate the small things in life until they realize that time is running out and attempt to absorb the world all at once. I interpret this as an echo of educating the viewer. Showing the viewer how to listen carefully, and see the “seams” of the great painting that is life. In these artworks, I discovered that my purpose and my aim were the same.

The journey that I took (and I still am on) has shown me what I truly want. More. Not more of life, but more from life.

The knowledge of this understanding has changed me, as I wake up everyday, I open my eyes a little more. I try to see a little deeper and understand the inner workings of my surroundings. I do this now with a renewed passion, commitment and sense of wonder at my findings. The growing of my experience has led me to rethink my understanding of the very world I live in.

The material used to weave the world around us cannot be truly comprehended by the human mind. For someone living the life of royalty to the poorest of the poor, I truly believe that this way of thinking can make life more dynamic and give it depth.

My artwork always needs to convey my passion. What I believe, is that artwork is supposed to reach beyond the boundary of the frame and break the laws of physics, society and the very way our minds work.

These paintings are my thoughts married with action. These are when I have “jumped out the frame”. I hope you enjoy them as much as I did creating them.” – Hussein Salim 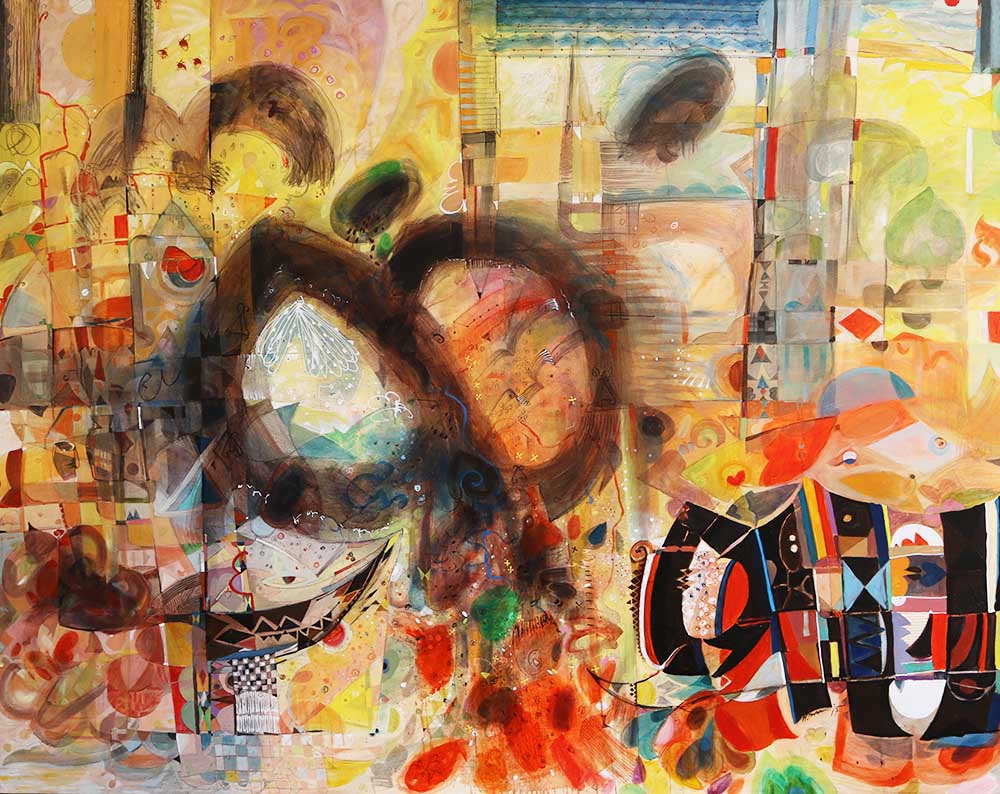 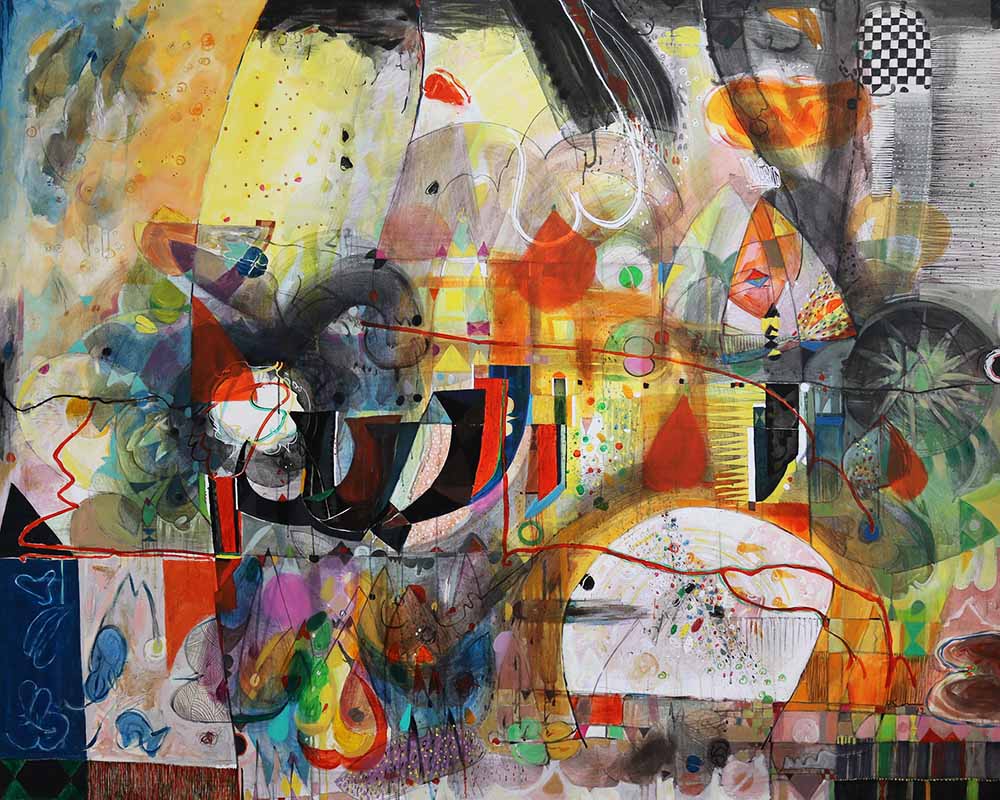 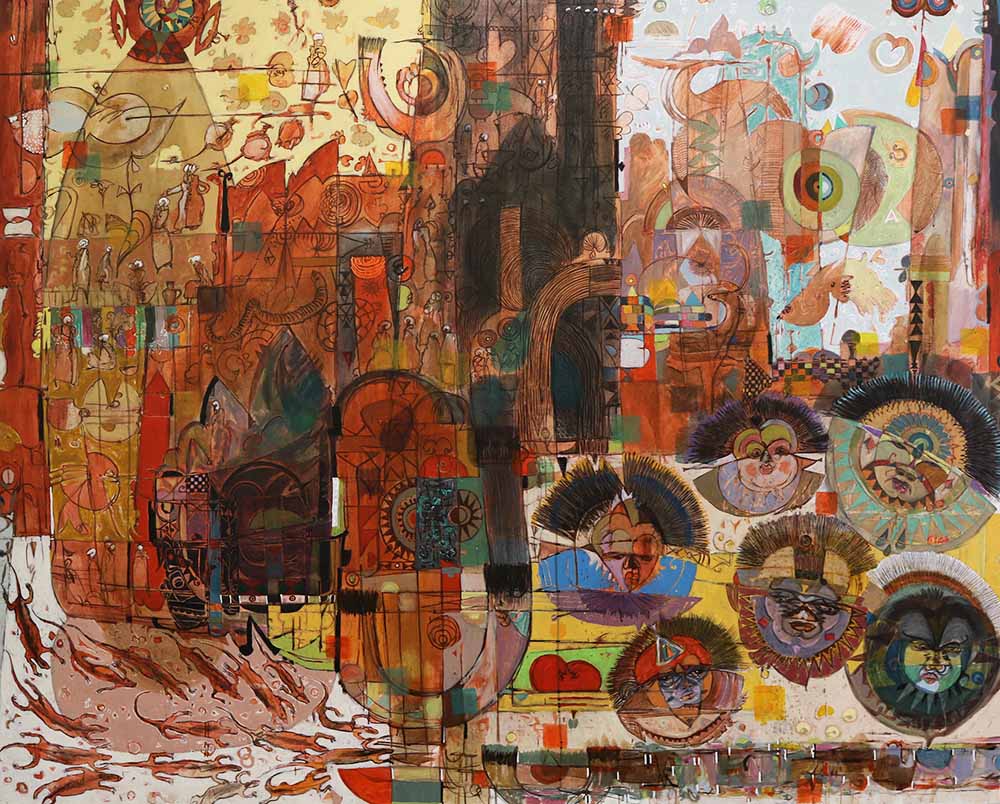