Democrazy: a demonstration of craziness, a solo exhibition at Eclectica Contemporary

In 2018, Ofentse Seshabela first exhibited with Eclectica Contemporary. First on a group exhibition at the gallery and then at the FNB Joburg Art Fair. His installations of collage, smudging and juxtapositions have grasped young children, experienced collectors and old mavericks alike. Most notable was his questioning work ‘Land?’ installed at the FNB Joburg Art Fair, which was composed of bullet casings dotting across a wall of the booth to form the letters and question mark. A metaphor, an oxymoron, found objects and the construction of an artwork that articulated the elephant in the room of the country at the time. From the question of land, to the complexities of violence in the country which have formed a thematic focus in his large-scale collage pieces, Seshabela has established an artistic practice that is concerned, considered and unflinching.

As 2020 begins a new decade, the focus of Seshabela’s work is now to both reflect and project forward, presenting images that are puzzles and mirrors of the state of the world as he sees it. Democrazy: a demonstration of craziness is his solo exhibition, exhibited at Eclectica Contemporary from February to coincide with Cape Town Art Week and will be a key aspect of the Eclectica Contemporary presentations during the Investec Cape Town Art Fair 2020.

Democrazy: A Demonstration of Craziness is the result of work that Seshabela spent most of 2019 busy with. Seshabela feels that it is important to reflect on the progress of South Africa’s post-apartheid democratic system, and how it has impacted people and spaces.

The title of the exhibition is inspired by the late Nigerian musician, Fela Kuti in his song Teacher Don’t Teach Me Nonsense. The ideals of politics and society presented by Fela Kuti impacted Seshabela’s thinking and informed the process of putting his artworks together. “I remembered his song titled Teacher Don’t Teach Me Nonsense”, said Seshabela, “I find the play on words very interesting, particularly in the term ‘Democrazy’. It is a classic juxtaposition that I think best describes the socio-political system that we are living in as South Africans. It is crazy that we are still dealing and fighting against issues that were constructed to make black people suffer in society”.

The work Seshabela has produced for Democrazy: a demonstration of craziness is filled with juxtapositions of form, ideas, narrative and symbolism. Dimension and perspective is distorted and upended through the collage-like positioning of his depictions. Seshabela evokes motifs of Apartheid imagery, such as police dogs and army tanks alongside portraits of politicians, and in this way, he calls into question the familiarity of certain representations and the lingering ghosts of their meanings. He presents these questions from a place of deep concern and frustration, disillusioned by the systems of power that remain, designed to leave poor people poor.

Seshabela’s work reflects on the fighting nature of black subjects against constructed systems and spaces that continue to undermine the value of black people. Positioning his work from his own lived experience and personal perspective, the work focuses on black people and distinct spaces. In this exhibition, he imagines people as soldiers in spiritual warfare. The armour depicted is thus metaphoric for protection needed to survive as well as signalling the context and thematic understanding in which Seshabela places his work. Looking to inter-war and post-war art movements, Seshabela considered the work of Surrealist artists and was inspired by the treatment of figures and forms as modes of emotive and psychological descriptors. He has, in turn, depicted some of the figures with elongated limbs. The extended limbs stand as symbolic of hegemony in systems of power. It can be understood that, through the works, Seshabela is communicating to the viewer that those with longer limbs are those that possess greater power, perhaps through social status, class dynamics, or political affiliation.

In considering the continuing tension in South Africa around issues of racial inequality, financial barriers and standards of living Seshabela reminds us that “due to our unforgiving history, black people are often found at a disadvantaged end of society. It is difficult to get a job. It is difficult to start and maintain one’s own business. It is difficult to raise a family. It is difficult to survive as a black person in this world. I say this, because I have had my fair share of struggles in my upbringing. I know that struggles vary from family to community to society. It has not been a smooth ride for me to be where I am today. I had to fight. In fact, I am still fighting and I have accepted my role as a fighter in this society”.

Democrazy: a demonstration of craziness is an exhibition that reflects and zooms in on the economic and structural construction of the lives of people living in the townships, informal settlements and rural areas of the country. Seshebala’s work is a visual representation of a co-existence of parallel worlds of society and power. The work is loaded with questions and speaks to the concerns that many continue to wonder, as repercussions and legacies continue to impact the lived realities of everyone in South Africa. 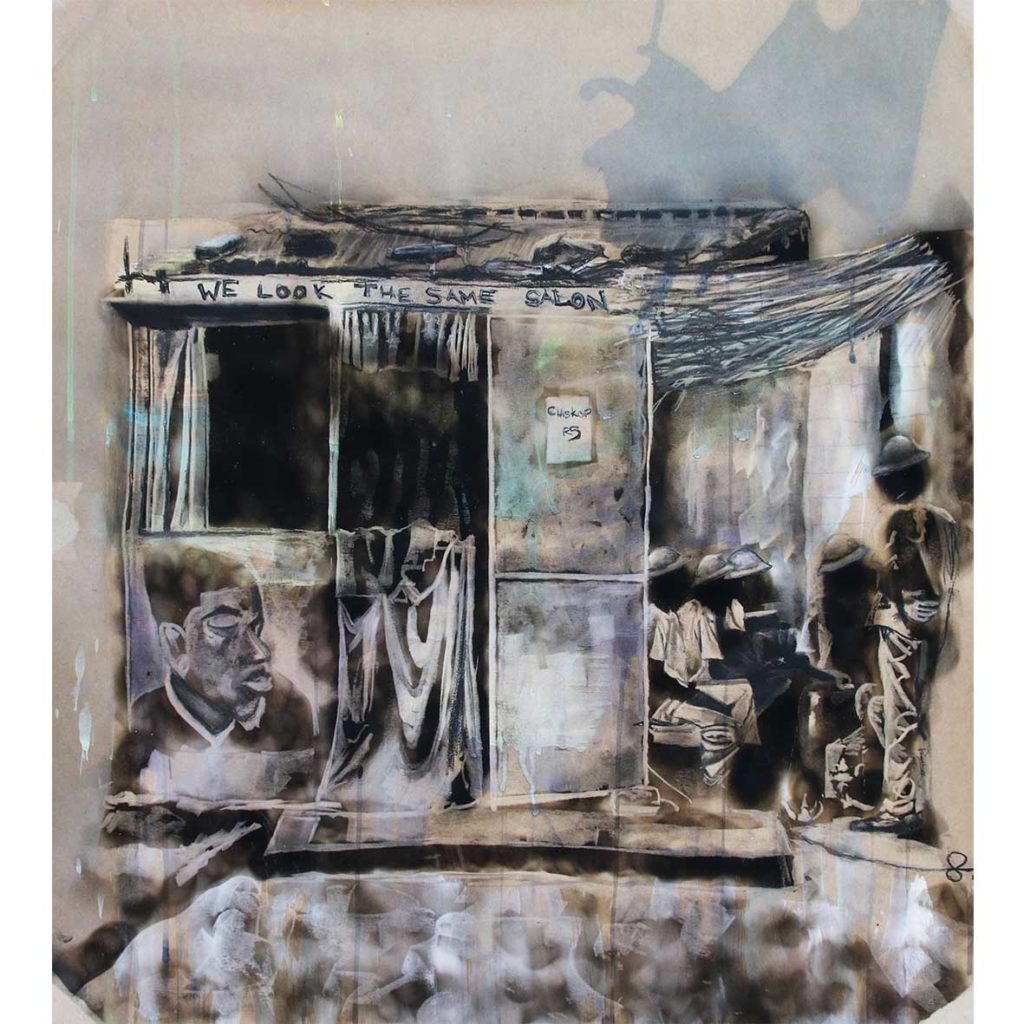 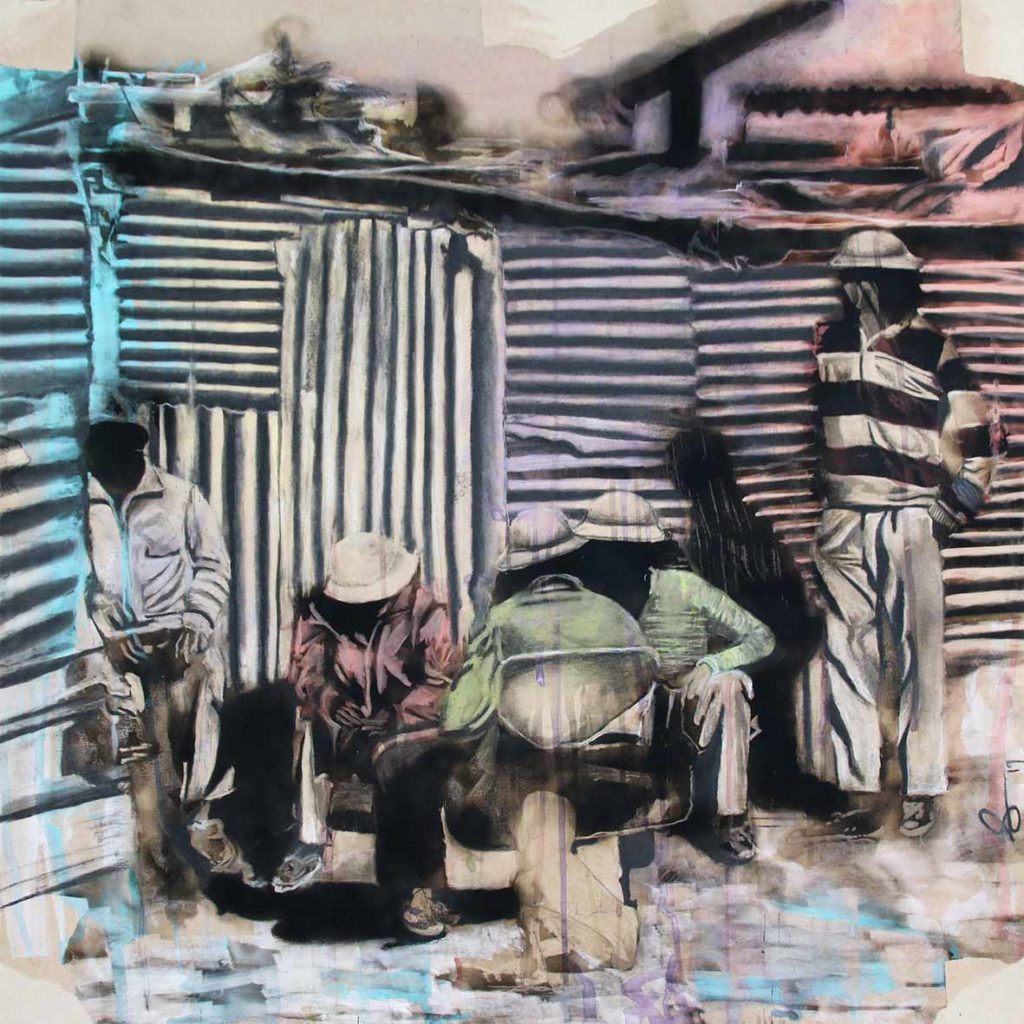 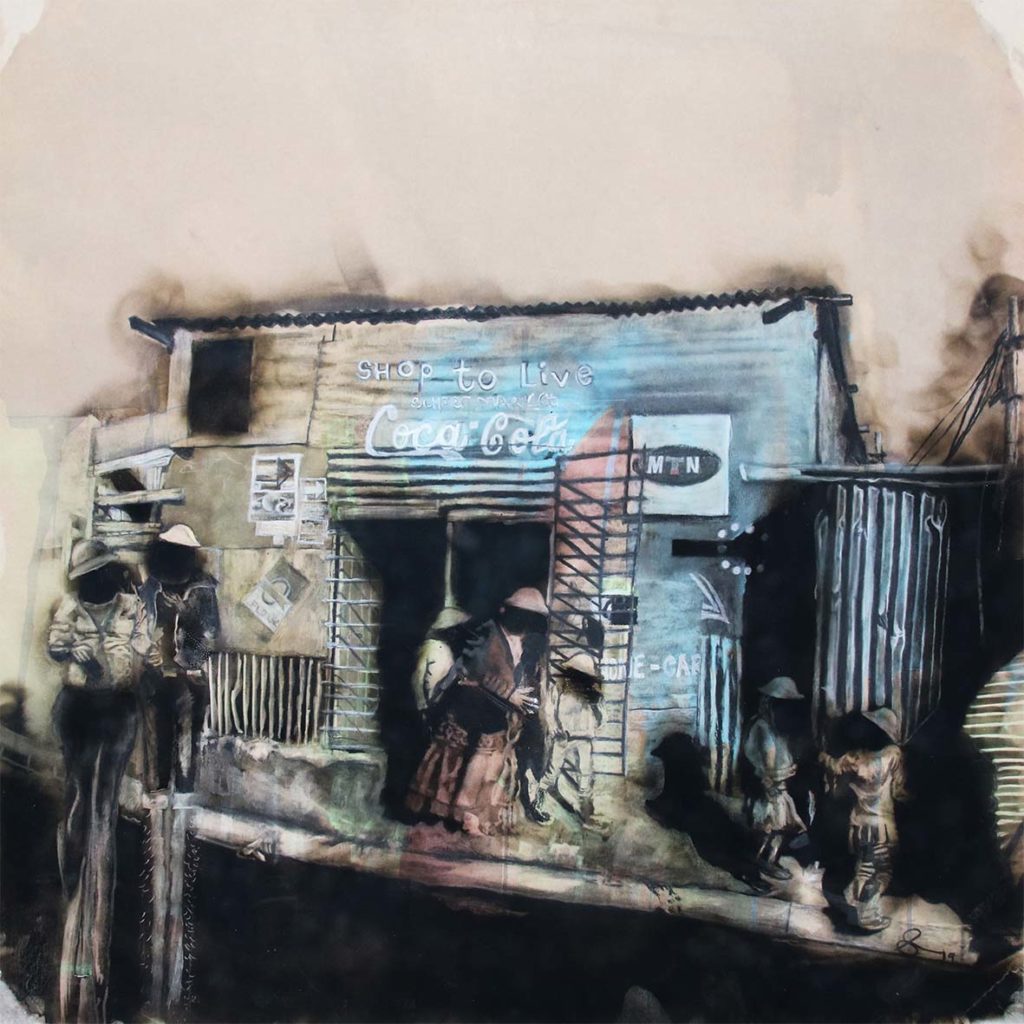 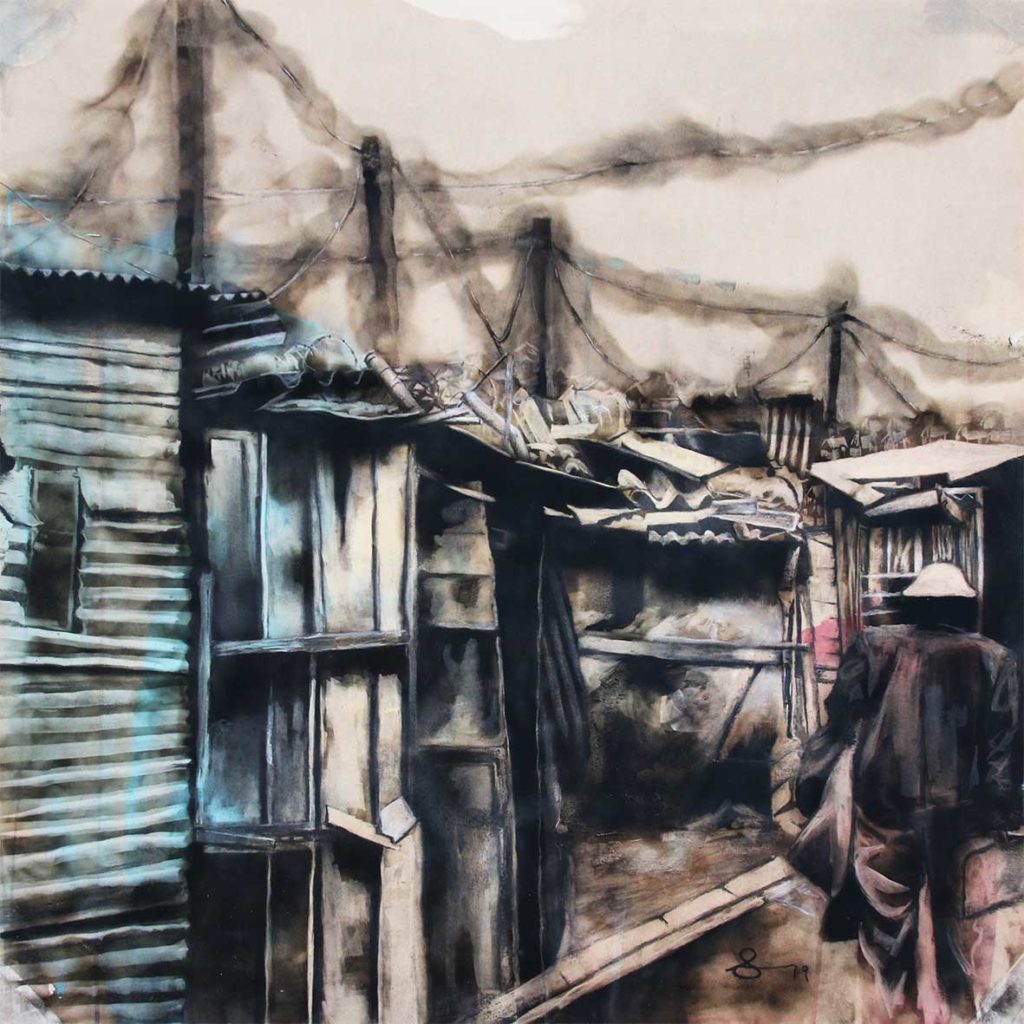 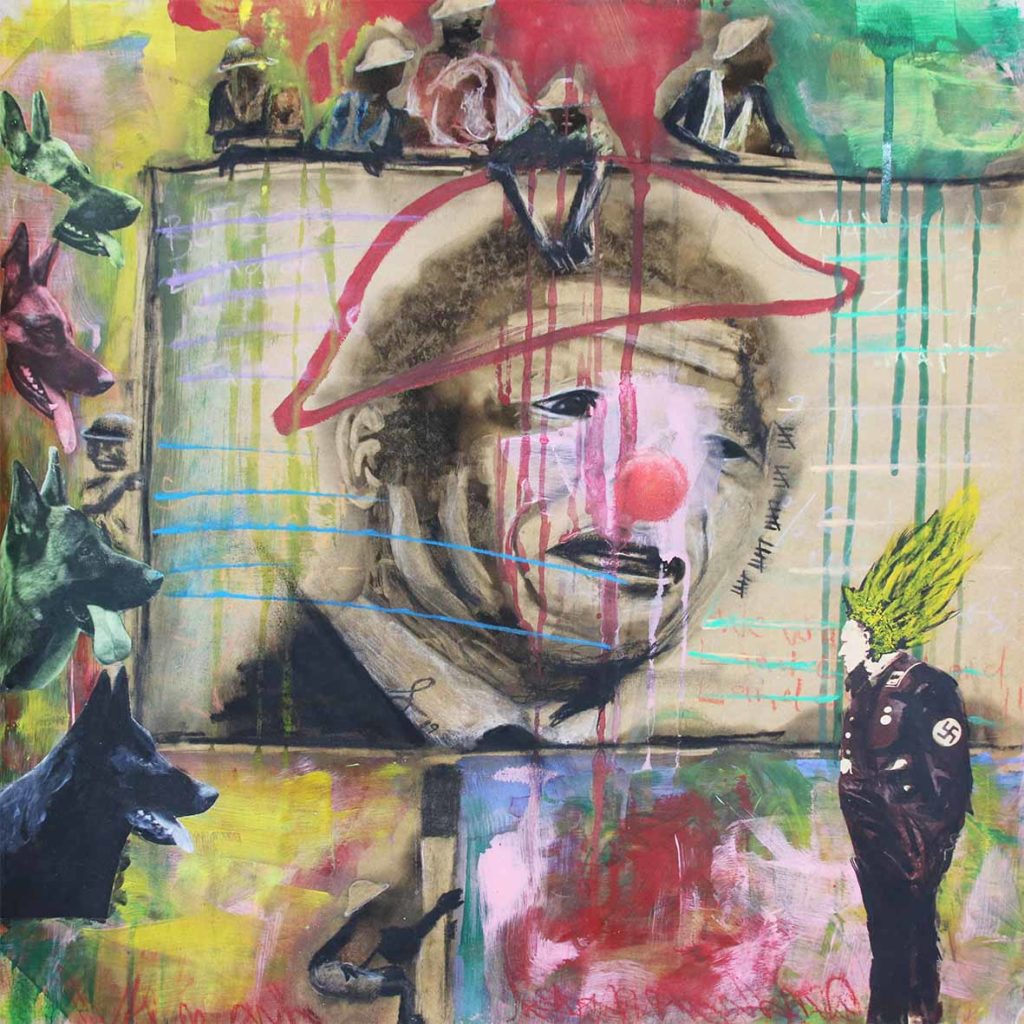 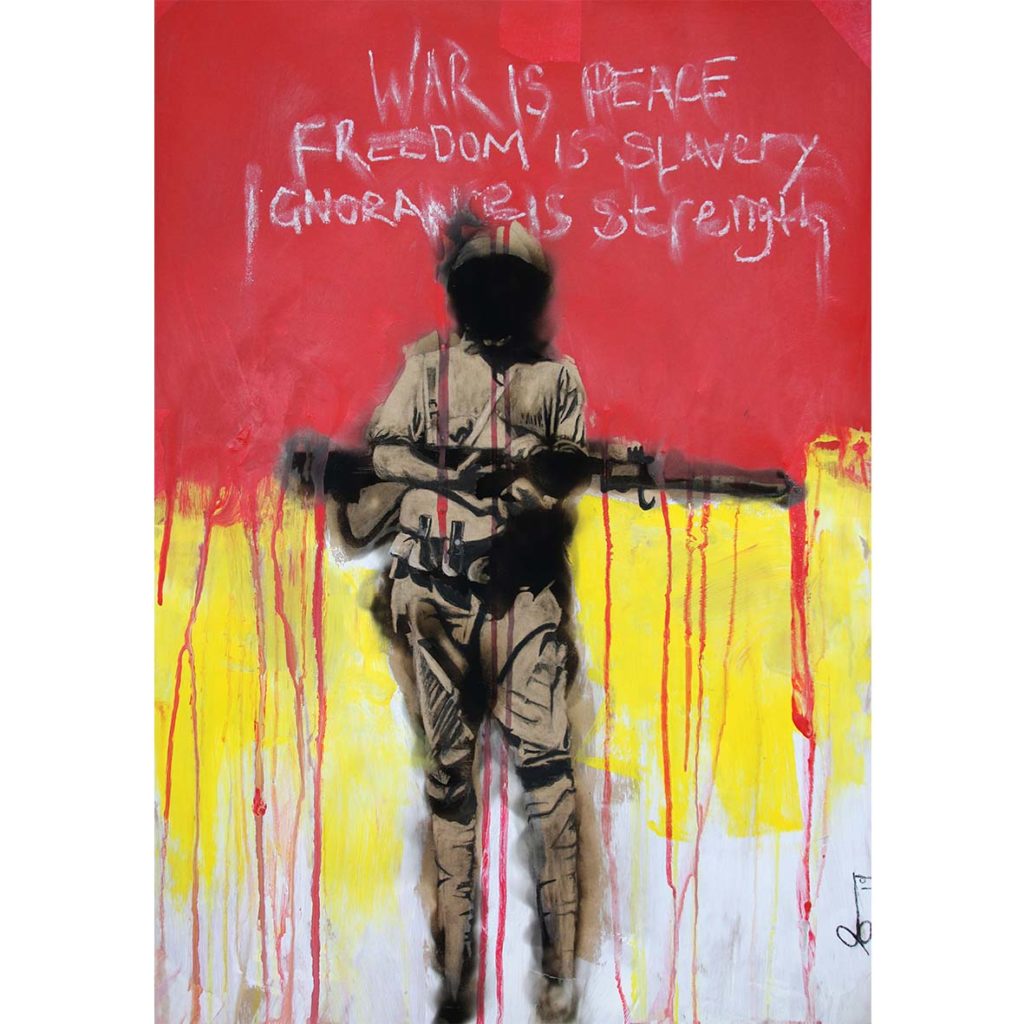 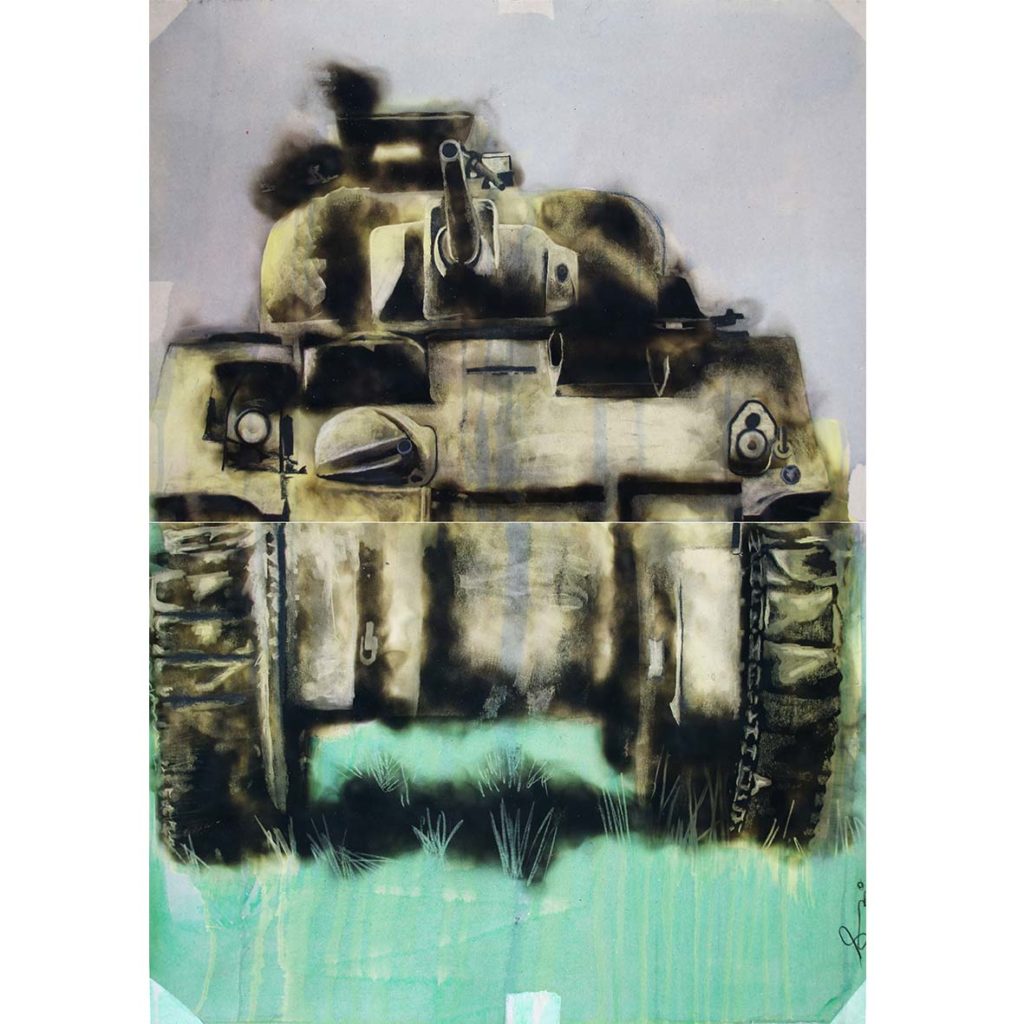 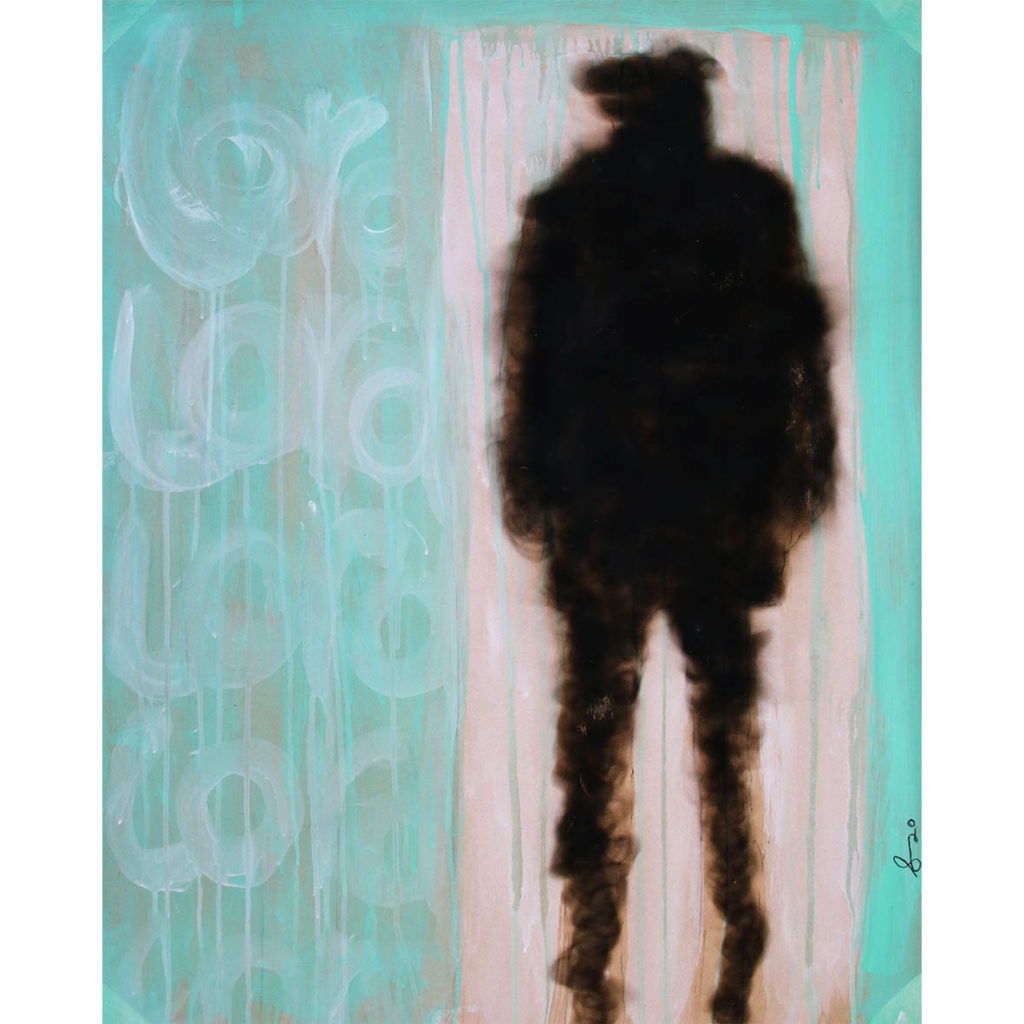 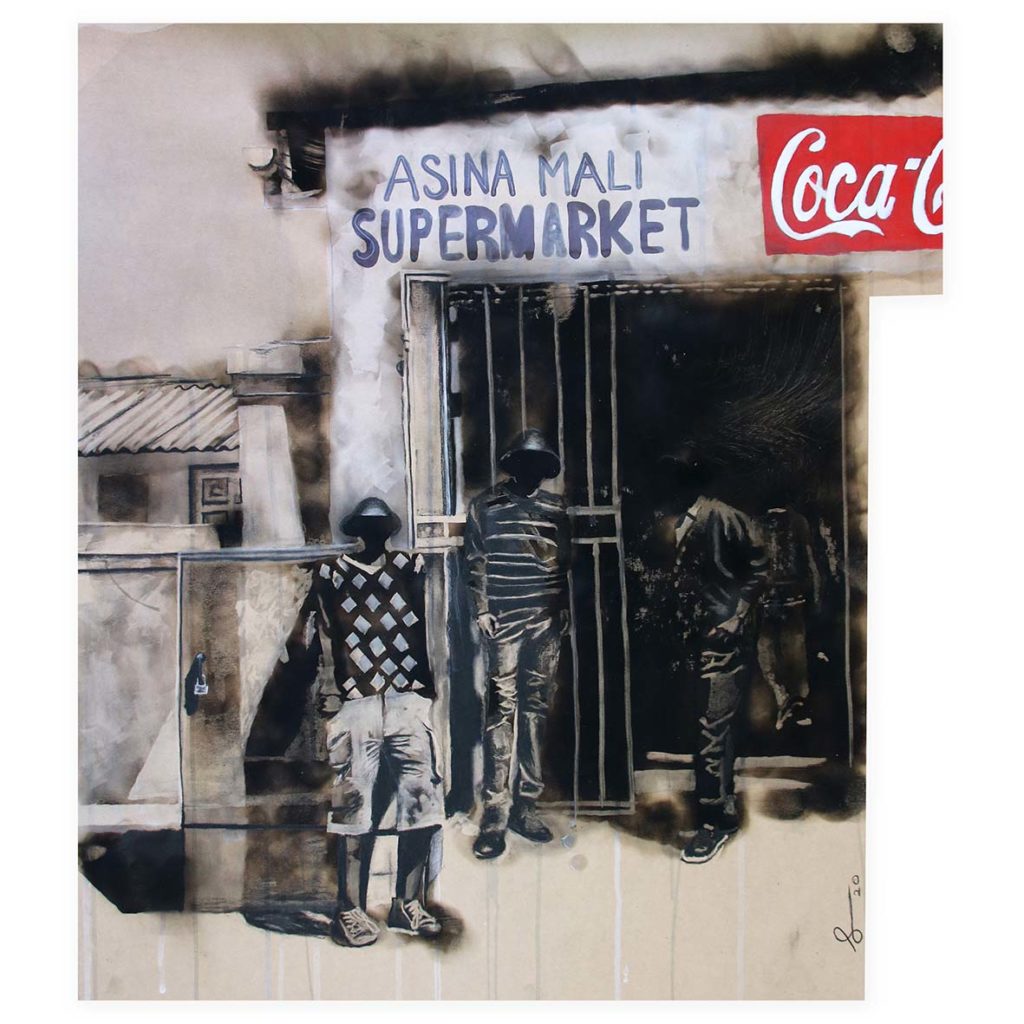 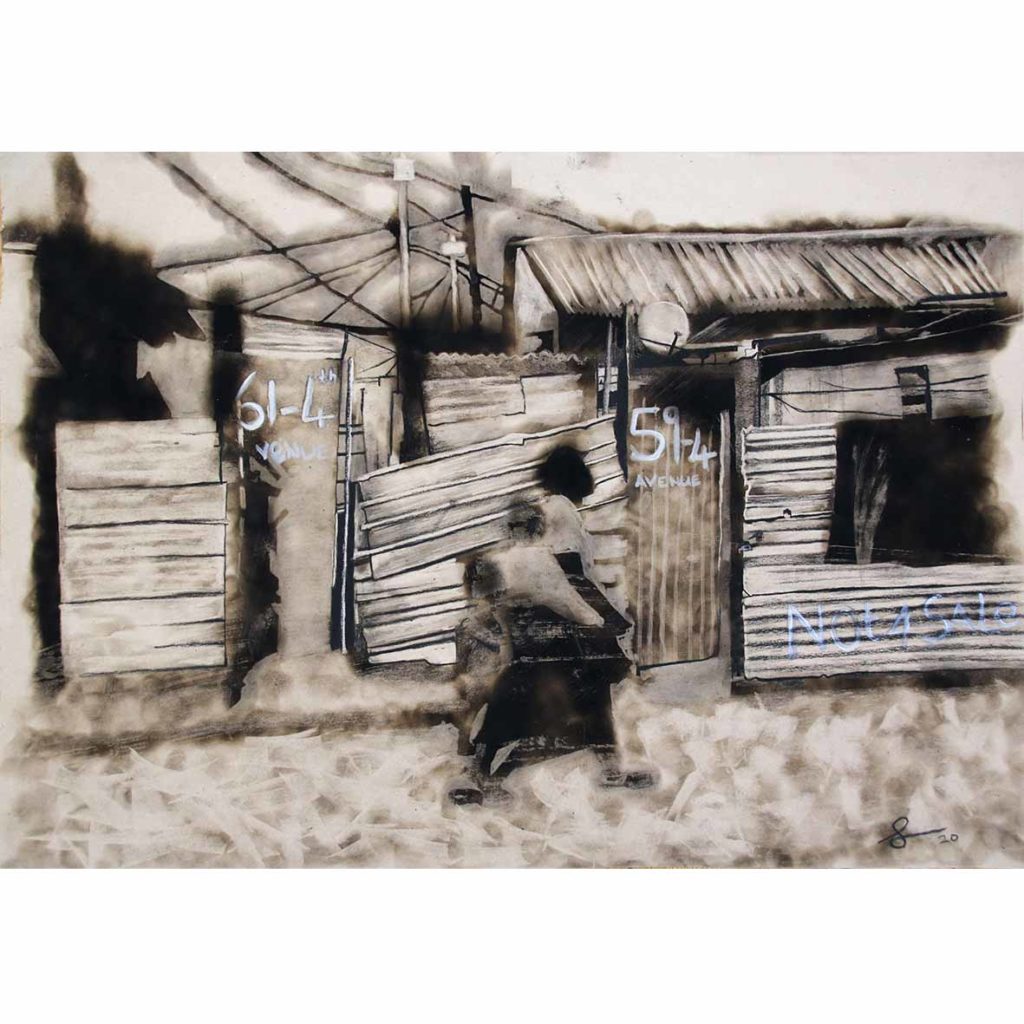 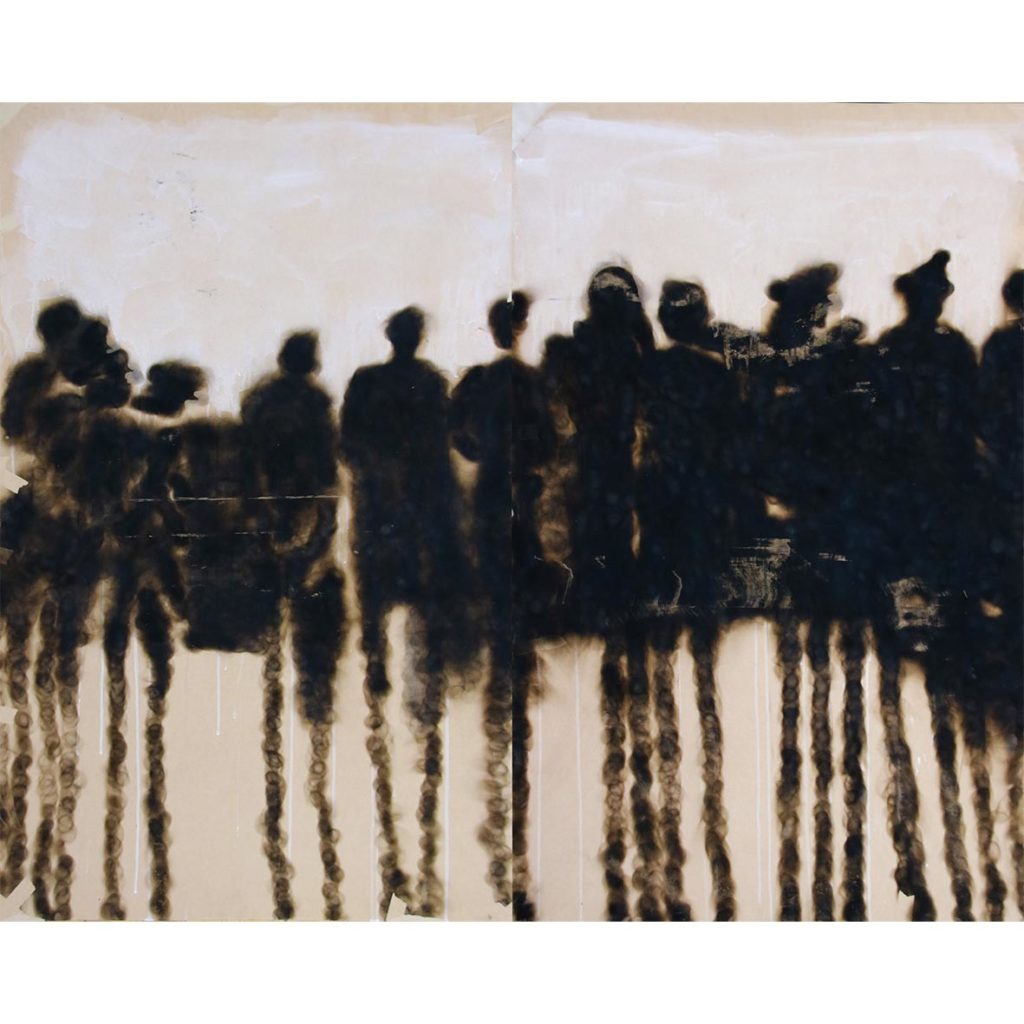 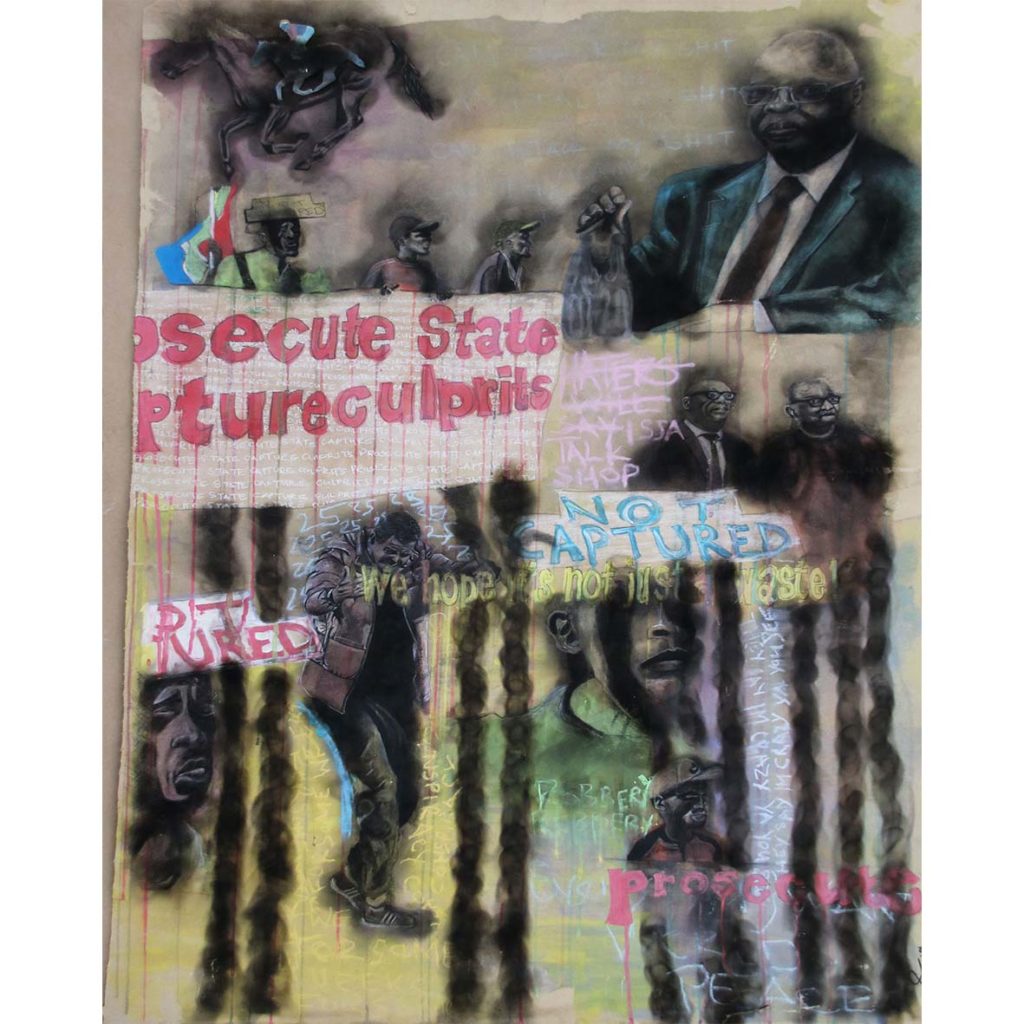 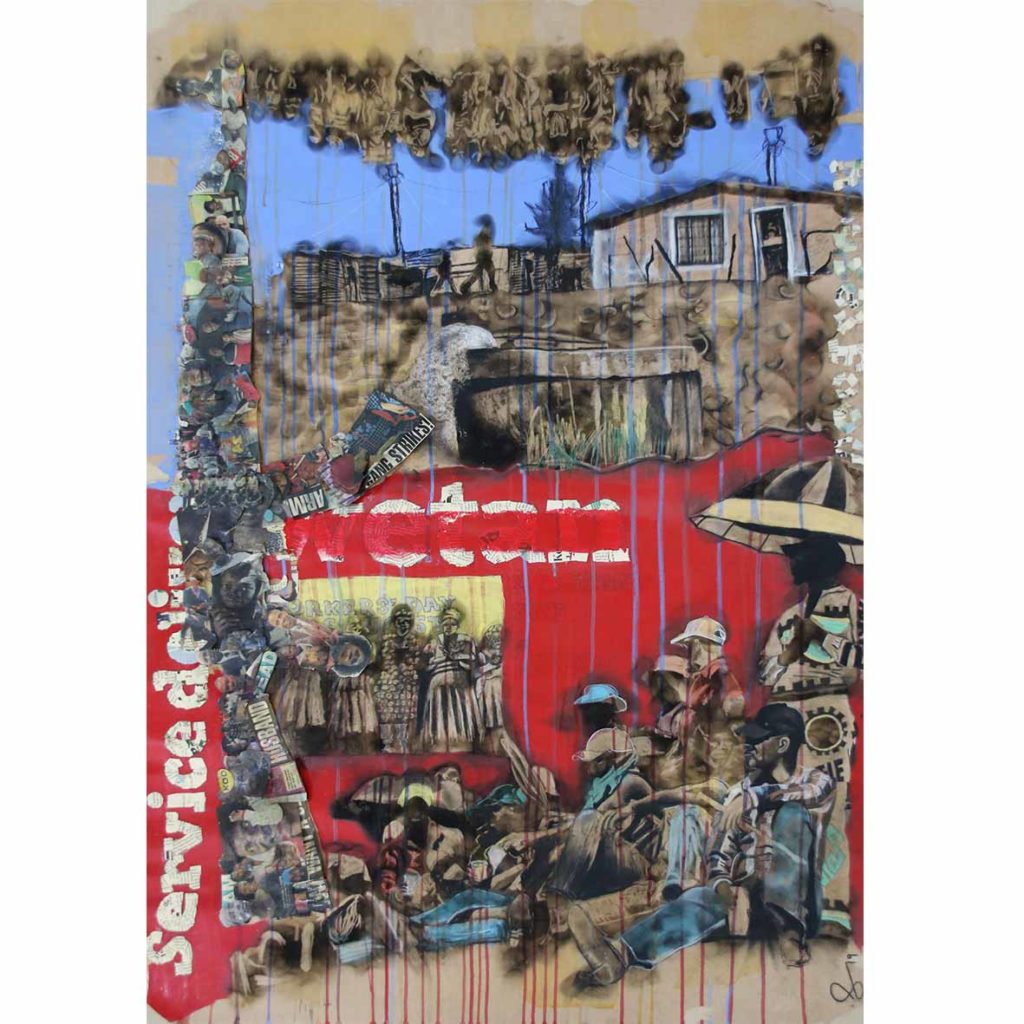 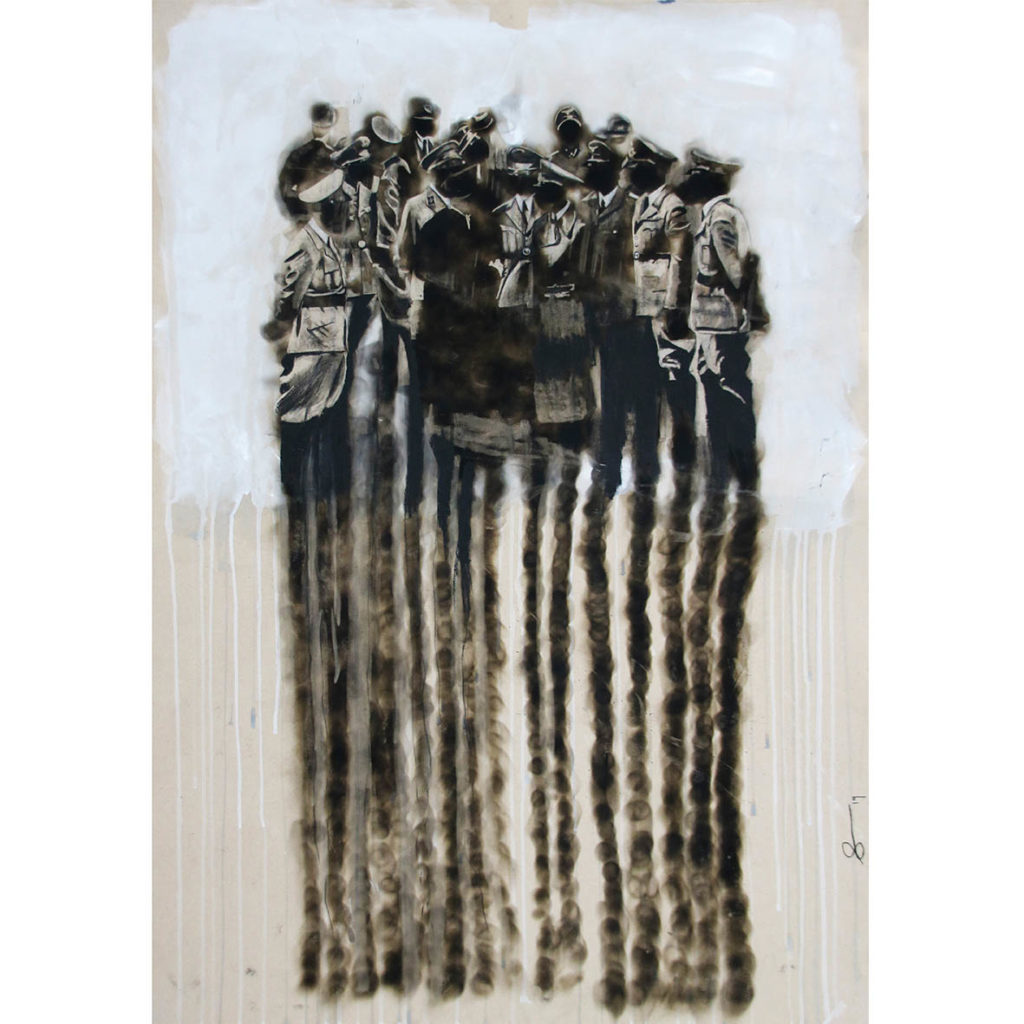