Skip to content
Previous Next
complicit geographies: A solo exhibition by Jeannette Unite 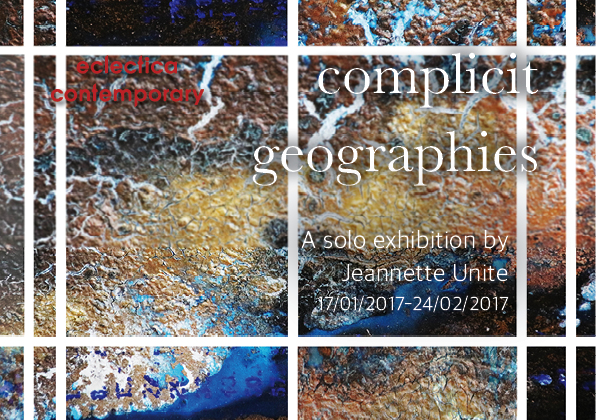 The study of the physical features of the Earth and its atmosphere, and of human activity as it affects and is affected by these, including the distribution of populations and resources and political and economic activities.

From the Stone Age, Bronze Age and Iron Age to this Age of multi-material, technological response following the industrial revolution 250 years ago. The ages of human technologies have been defined by our access to and ability to use different mined resources.

Mining provides us with all the ingredients to manufacture the technologies of our contemporary world. Behind mining are rich and contentious histories that have shaped social hierarchies.

The exhibition title encompasses bodies of work responding to different aspects of humans engagement and interaction and use of the wealth extracted from our planet, Earth.

All wealth is derived from the Earth and laws and legislation are constructed to regulate who has access and ownership of the resources from the planet. This wealth is surveyed, mapped, gridded and measured. It is  then divided, allocated and regulated via legislations that include title deed and mineral right that are stored in archives.

Unite explores the impact and relations between power and Earth through the mechanisms, both technical and social, of our modern world that are so inextricably linked to mining. Her celebration of the industrial sublime critiques the force of human compulsion for material goods regardless of the environmental and social consequences.

Conversations around mining with Earth scientists, geologists, engineers, metallurgists,industrialists and mining and geology historians has further expanded her visual interpretation of the extractive industries.

The art Unite produced from these explorations is inextricable from the impact mining wrought on African history. We would live on a vastly different continent – and indeed a different world – were it not for the epochal discovery of diamonds, gold and other mineral deposits in the second half of the nineteenth century and the concomitant and sometimes tragic effects of these discoveries.

Jeannette Unite has deep historical links with mining. Her grandfather’s Cambridge University Engineering Degree paved his involvement in the metal industries in Johannesburg and her great grand-father part owned a gold mine. The family friendship with geologist Hans Merensky, who discovered West Coast alluvial diamond deposits where Unite had lived in the 1990s alerted her to her complicity as end-user of mined titanium.

That history coupled with her innate fascination with material and the complex world of extraction, production, labour, machinery, materials, value creation, development, and her involvement -complicity- has inspired her art for decades.Her focus is not on precious stones and metals. It is wealth creation through digging, scarring, extracting, producing and transforming. It is what humans do with their planet and the materials that are left – the dumped materials which are evidence of complex forces and are the medium and materials which inform, The colour and texture in her art work.

The artistic result is her exhibition COMPLICIT GEOGRAPHIES. Jeannette hopes to draw attention to all our complicity, as consumers who drive  mining industries and advocates for us to be worthy custodians of this beautiful world that is our only habitat.

Eclectica Contemporary in collaboration with the Mining Indaba 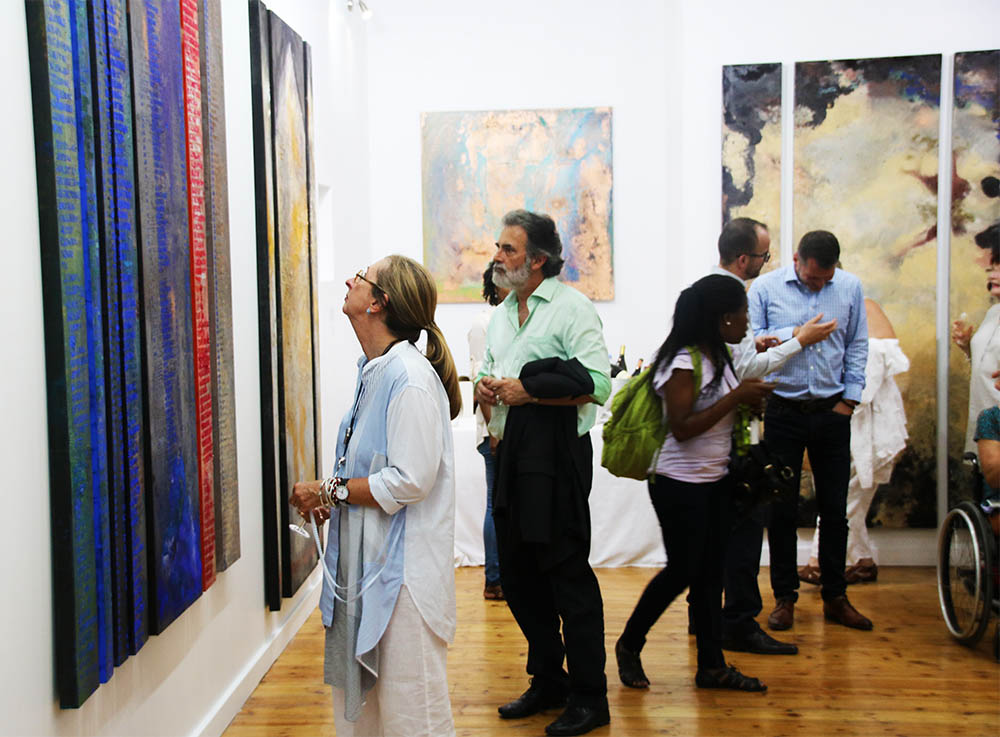 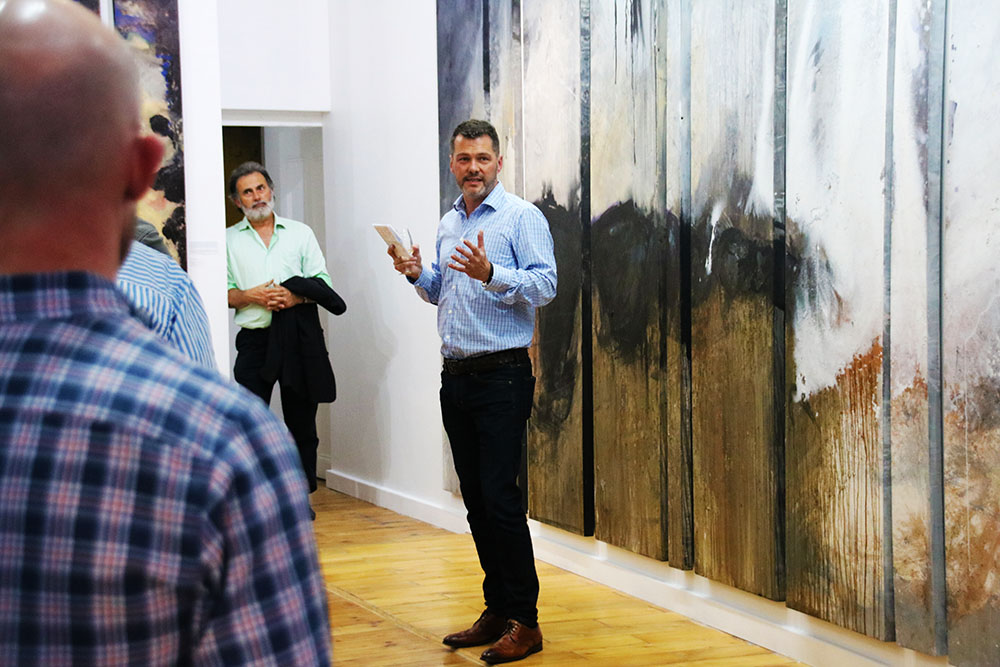 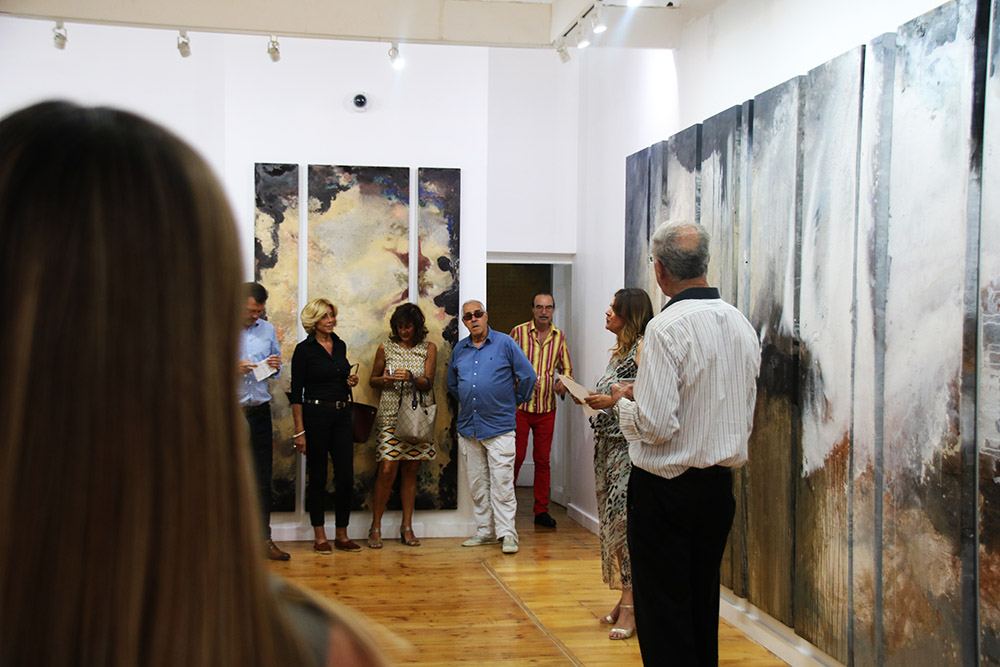 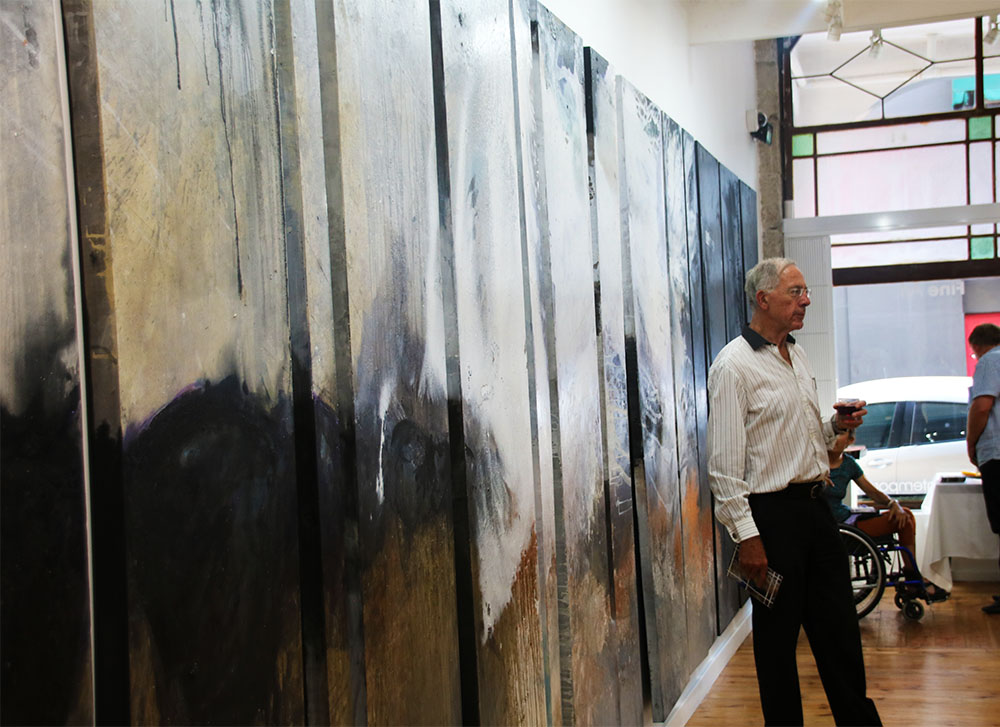 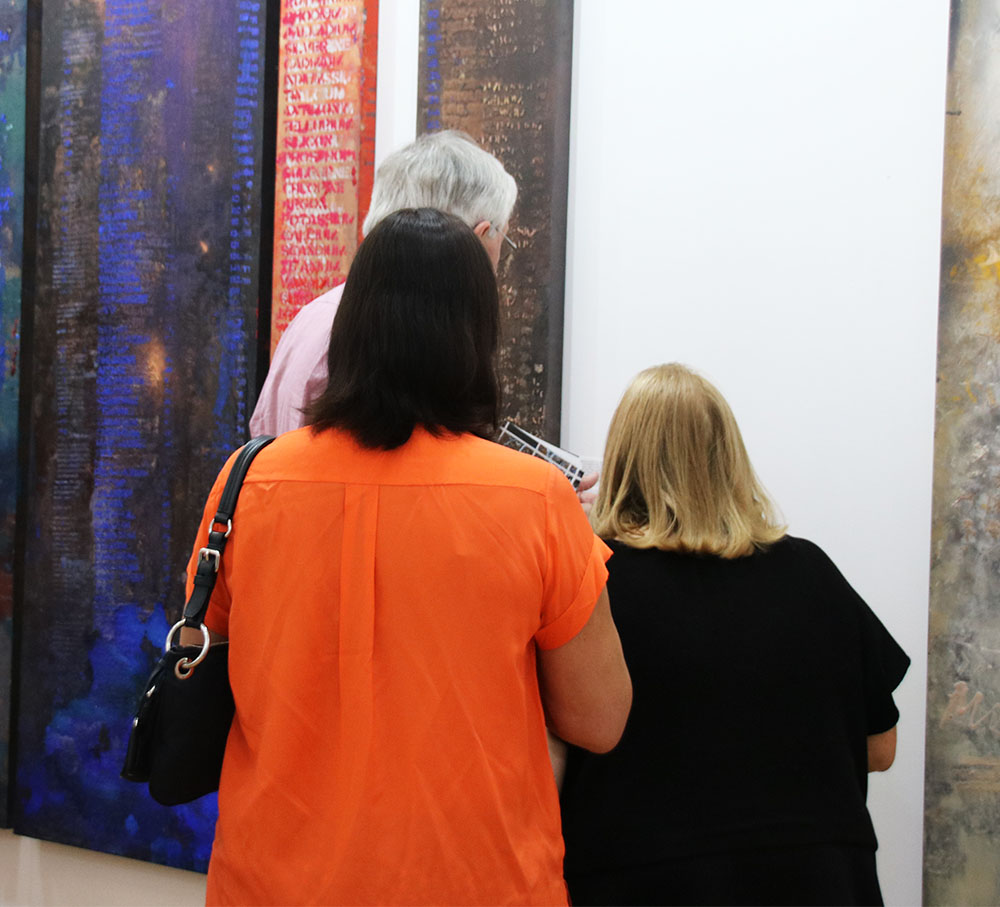 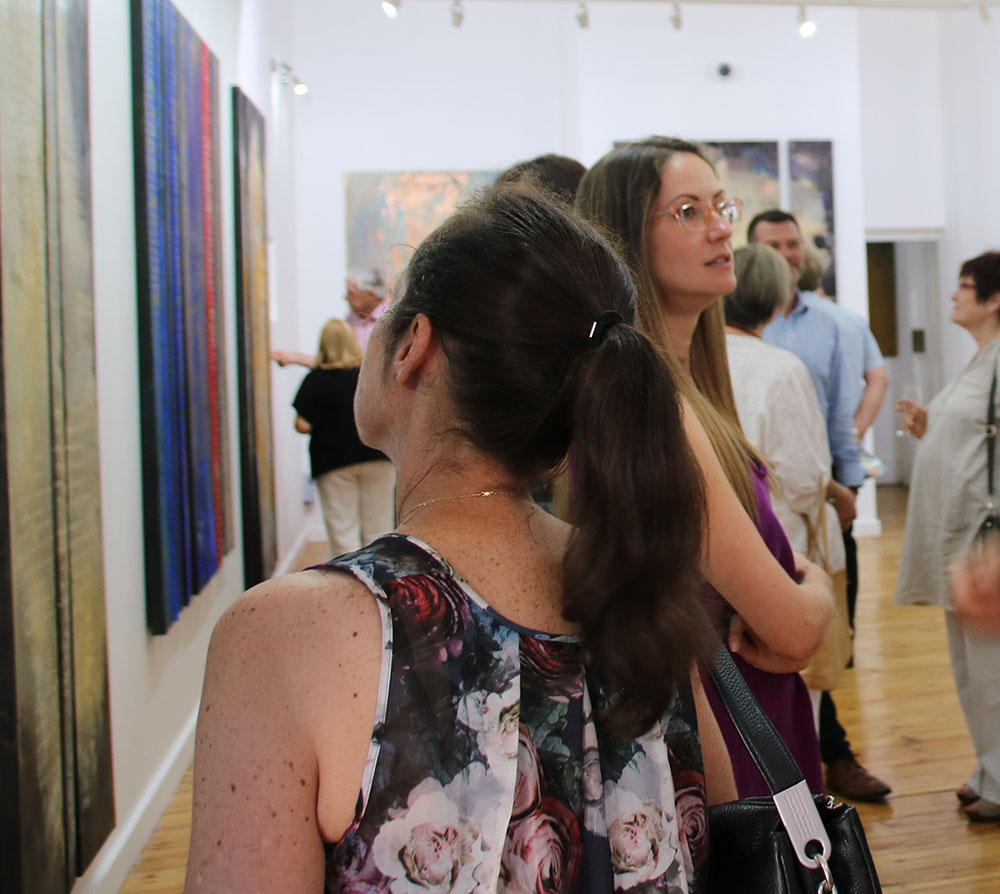 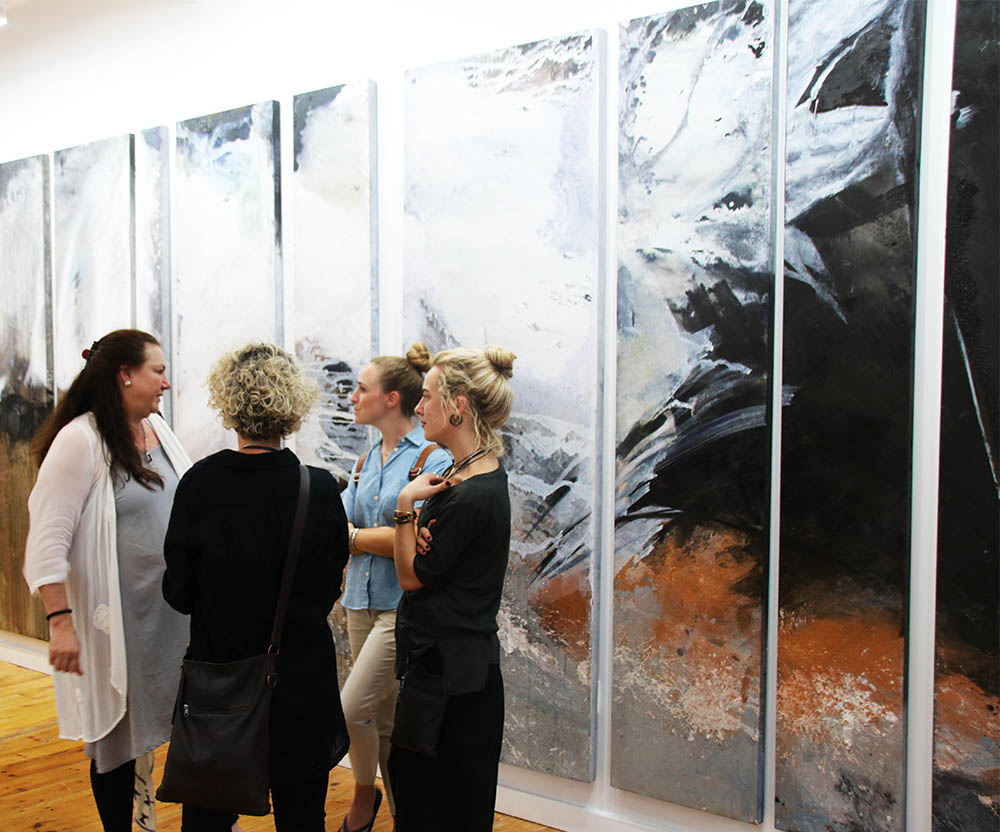 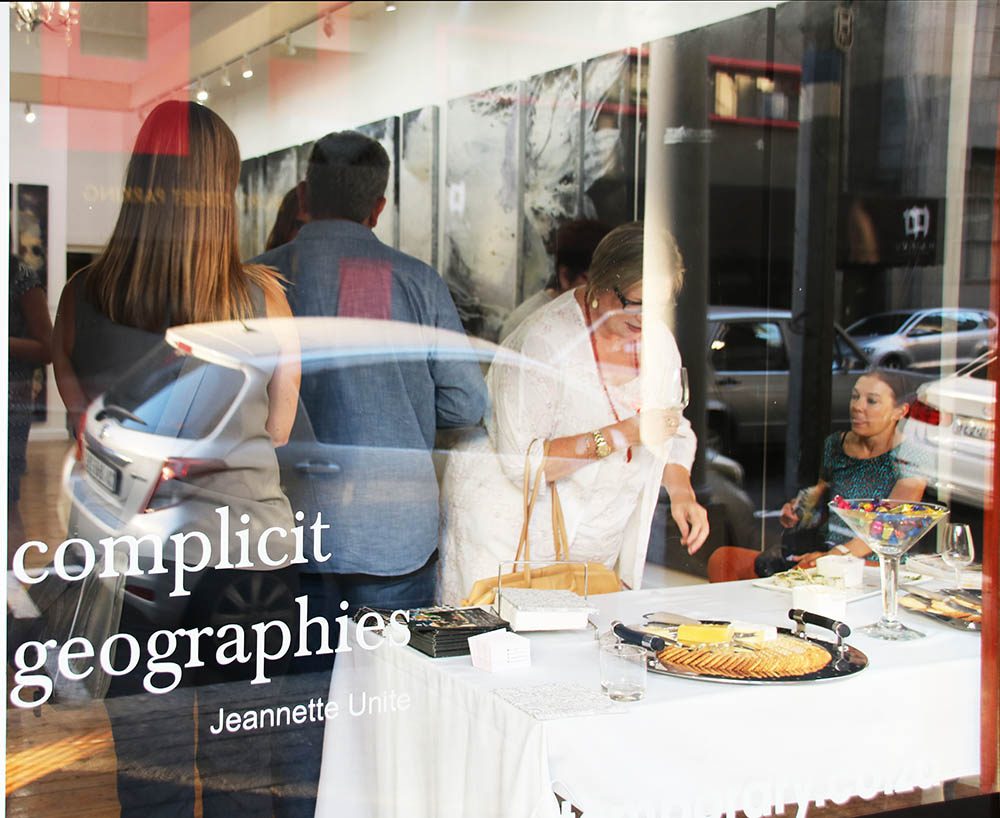 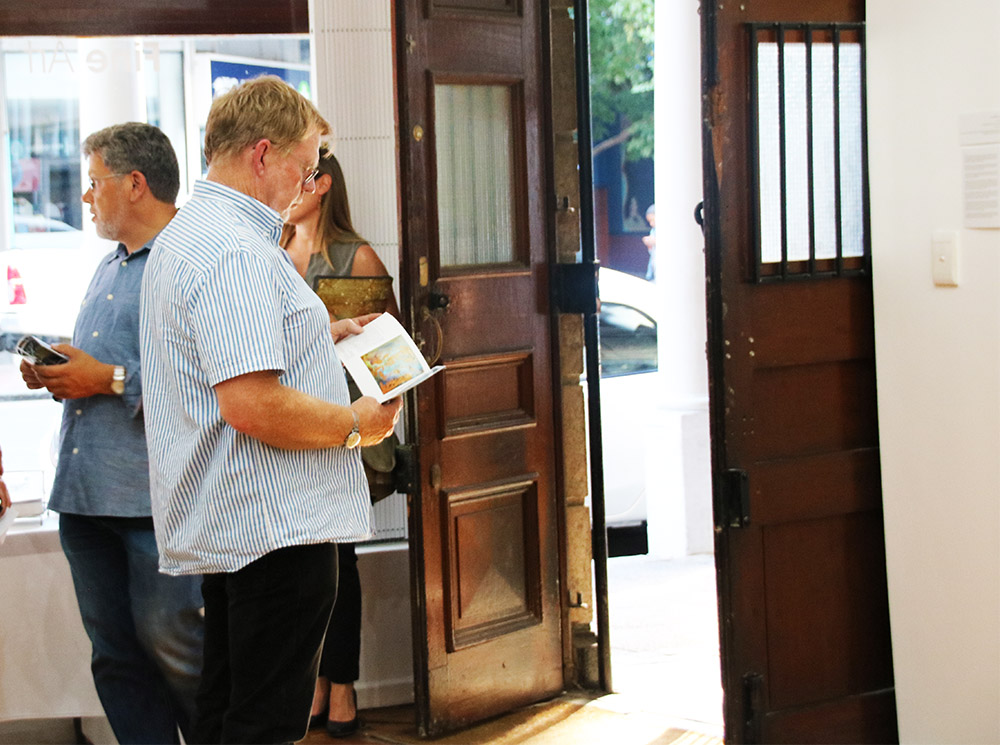 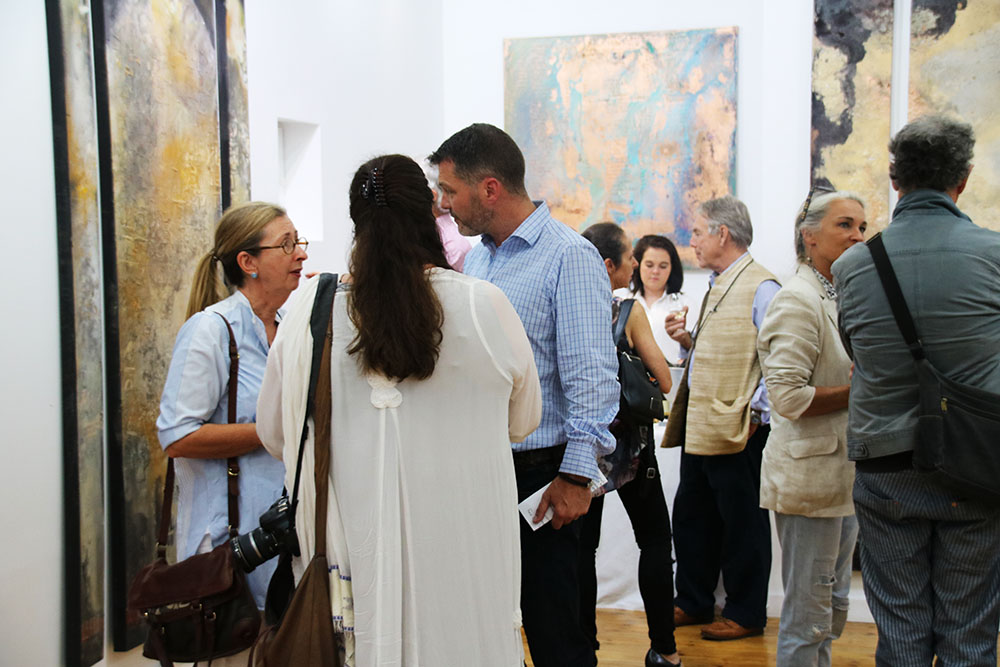 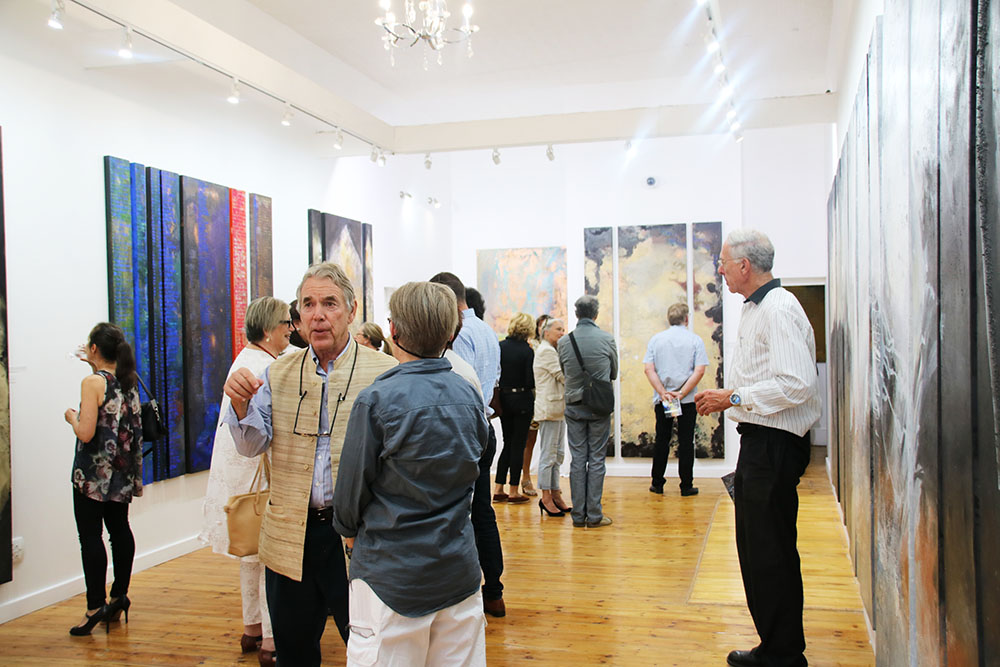 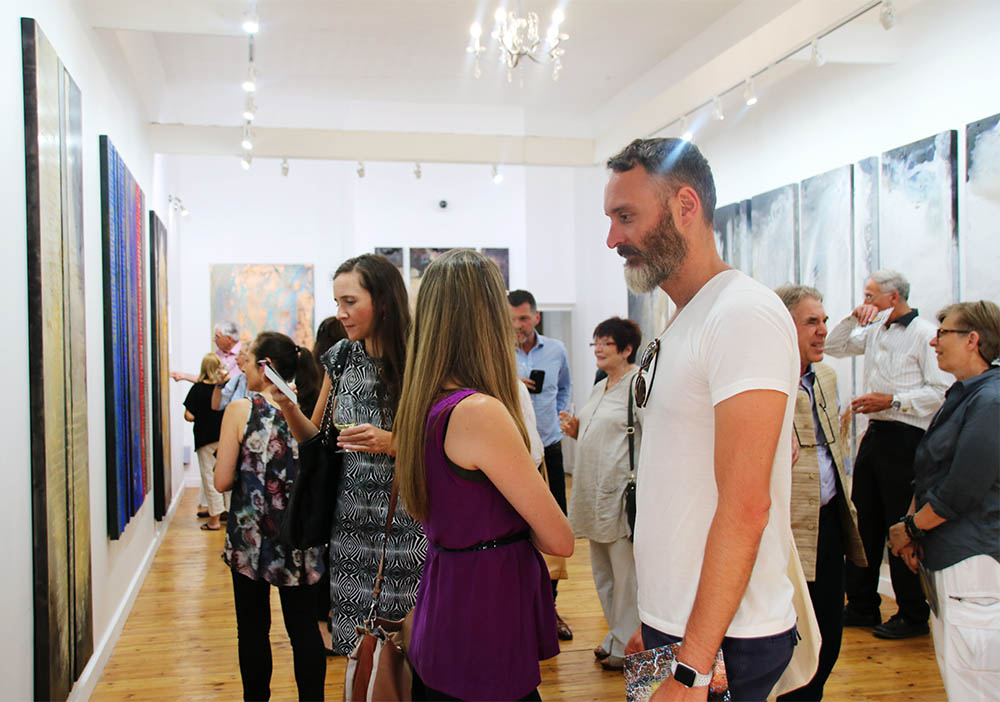 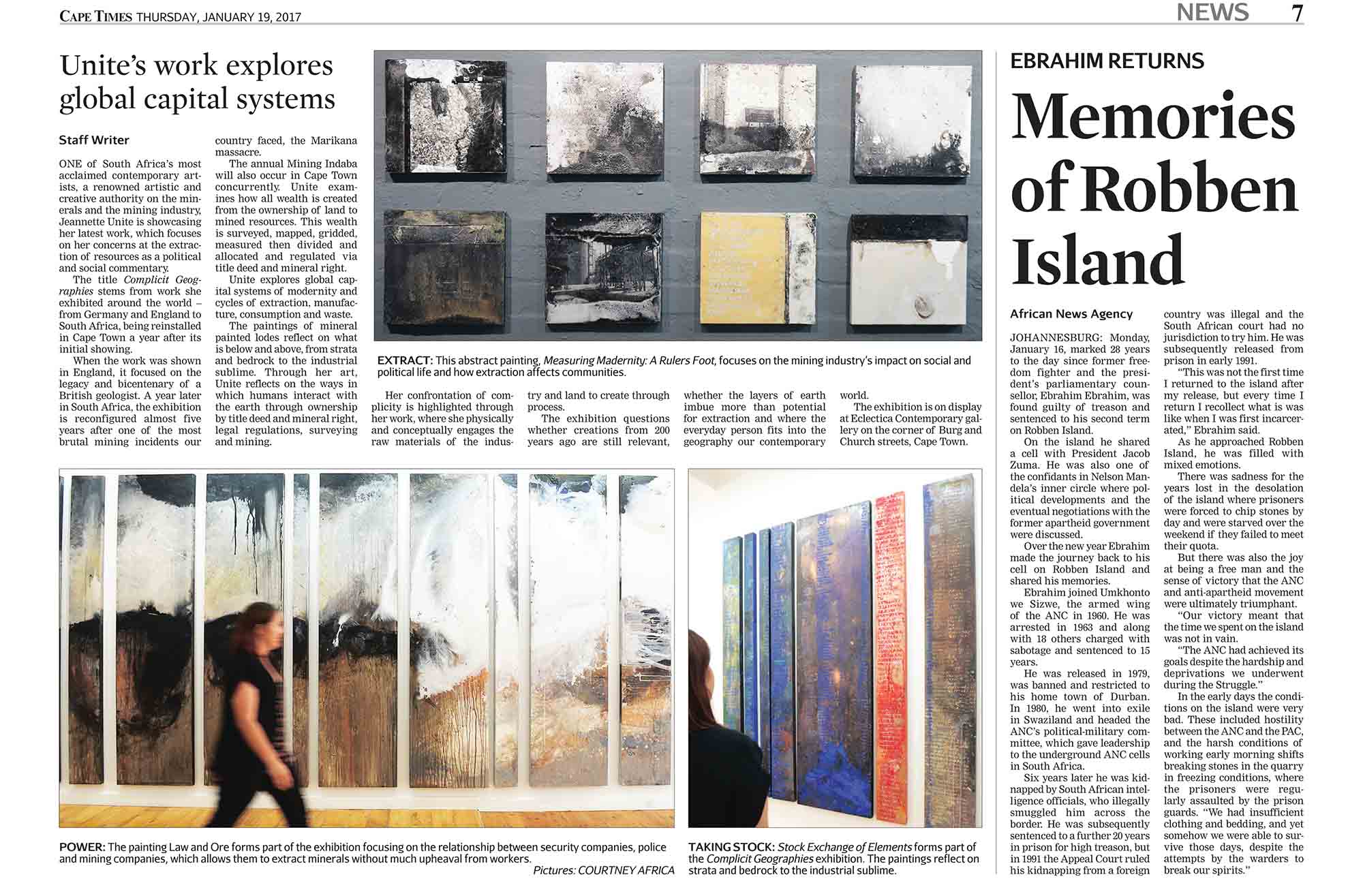 “During the early 1800s, the natural philosophers including geologists such as Darwin, explored Earth’s surface and subterranean. These explorations and geological investigations led to new discoveries and new scientific understandings. Consequently language developed with new vocabulary in order to explain these ideas.” – Jeannette Unite 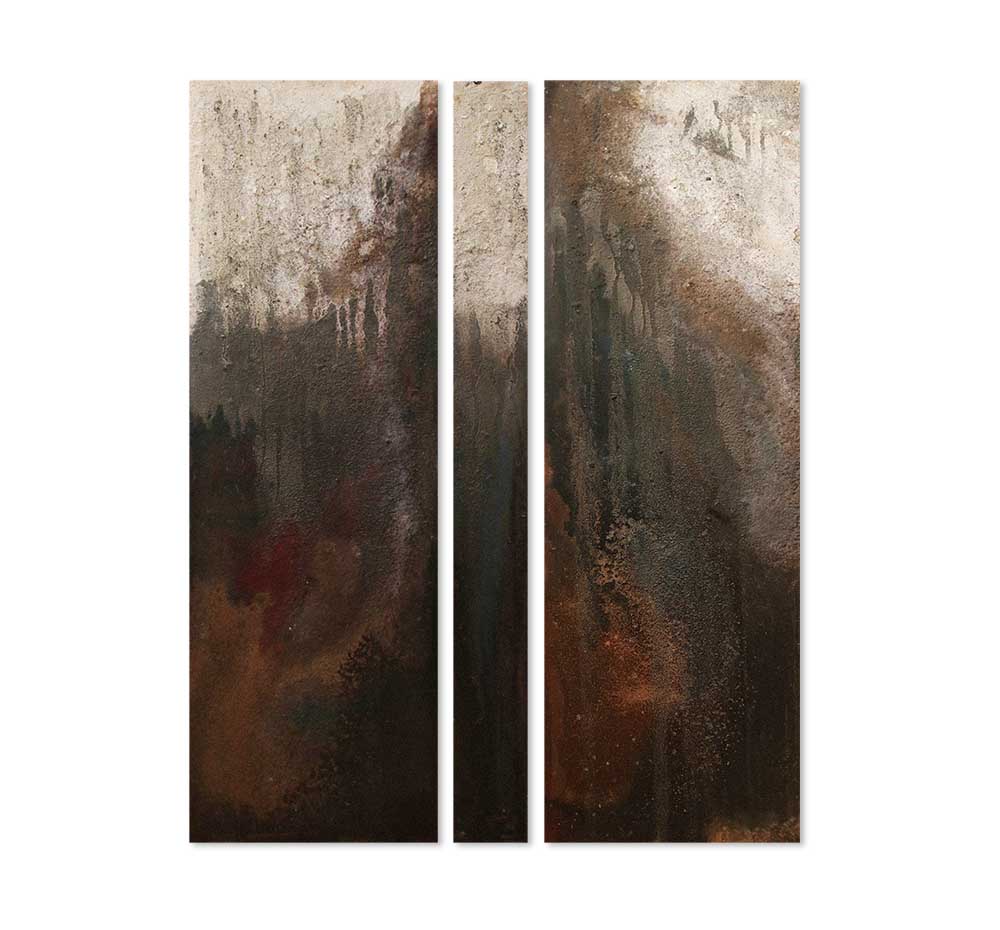 “If ore was priced according to the real costs involved in creating non-renewable deposits, then the economic distribution of minerals, would be different; perhaps even shared equally. Ore should be 1000 times more expensive than it is charged for at present.

“>Charging realistic prices for ore would mean labour wages could increase. This could remedy the uneven affects on people who live above extremely valuable mineral deposits, who mostly experience dire poverty and environmental devastation, known as The Resource Curse.
Consequently manufactured goods would be more expensive. People would hopefully take more care and demand that disposable consumption and built-in obsolesence be replaced with well-made merchandise resulting from careful use of resources … and better custodianship of our environment.” – Jeannette Unite

“Soon after the first successful flight of the Wright brothers in 1913, photographic aerial surveys became possible. I was fascinated by the hand drawn flight plans over printed maps indicating where aerial photographs had been taken by the specially equipped airoplanes.

I explore global capital systems of modernity and cycles of extraction, manufacture, consumption and waste. The paintings of mineral painted lodes reflect on what is below and above, from strata and bedrock to the industrial sublime and machines that carve and create our worlds” – Jeannette Unite 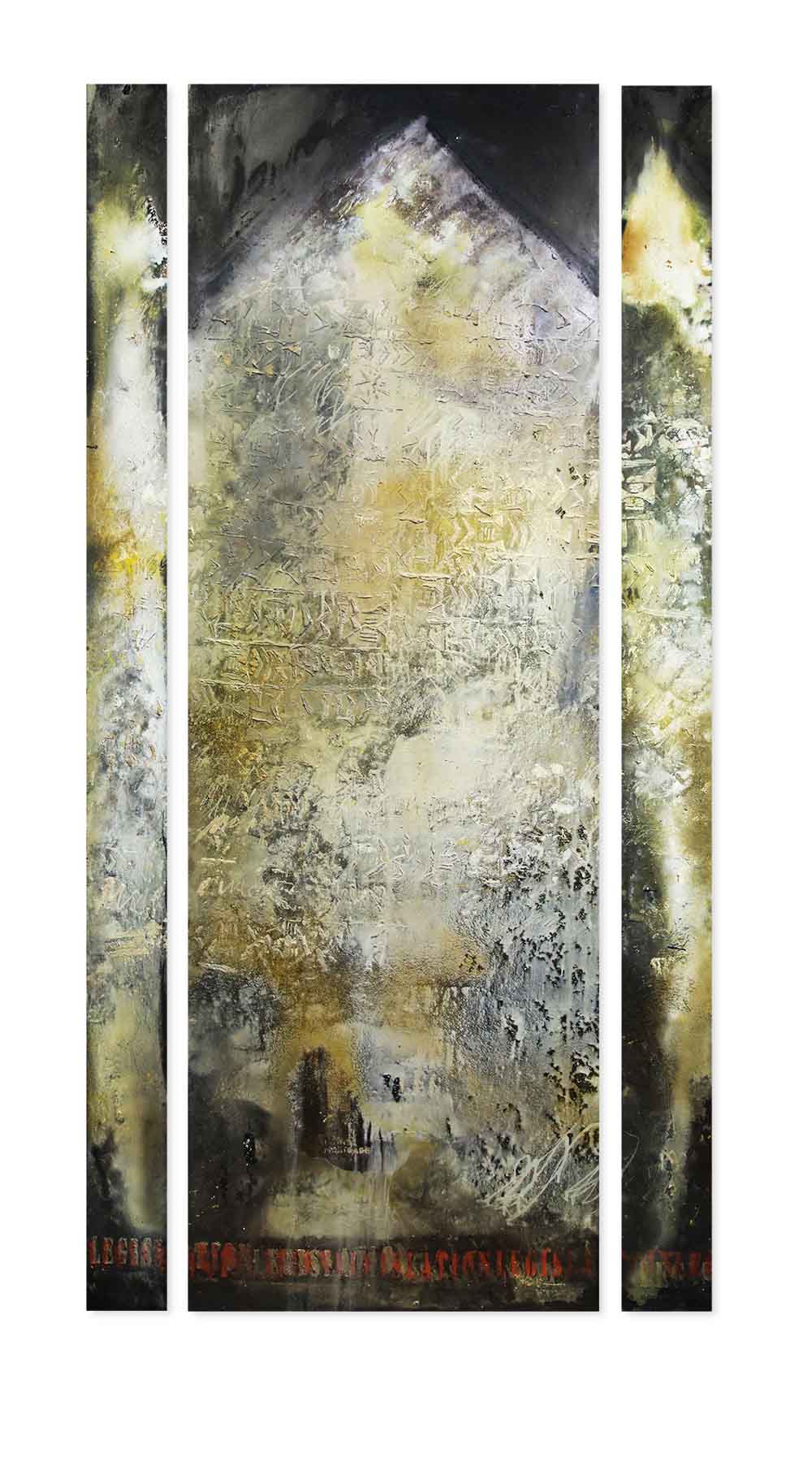 “Legislation pertaining to land, water and mineral rights are as old as the Sumerian tablets that determined who had access to particular resources.

The tools of colonial conquest are title deed and mineral right. The pen was mightier than the sword in claiming and securing ownership of land for European settlers. The legal systems of title deed reach far back in history, one of the oldest accounts are on Sumerian clay tablets. Where the record of who owned which boundaries and who had access to water were all captured and recorded. 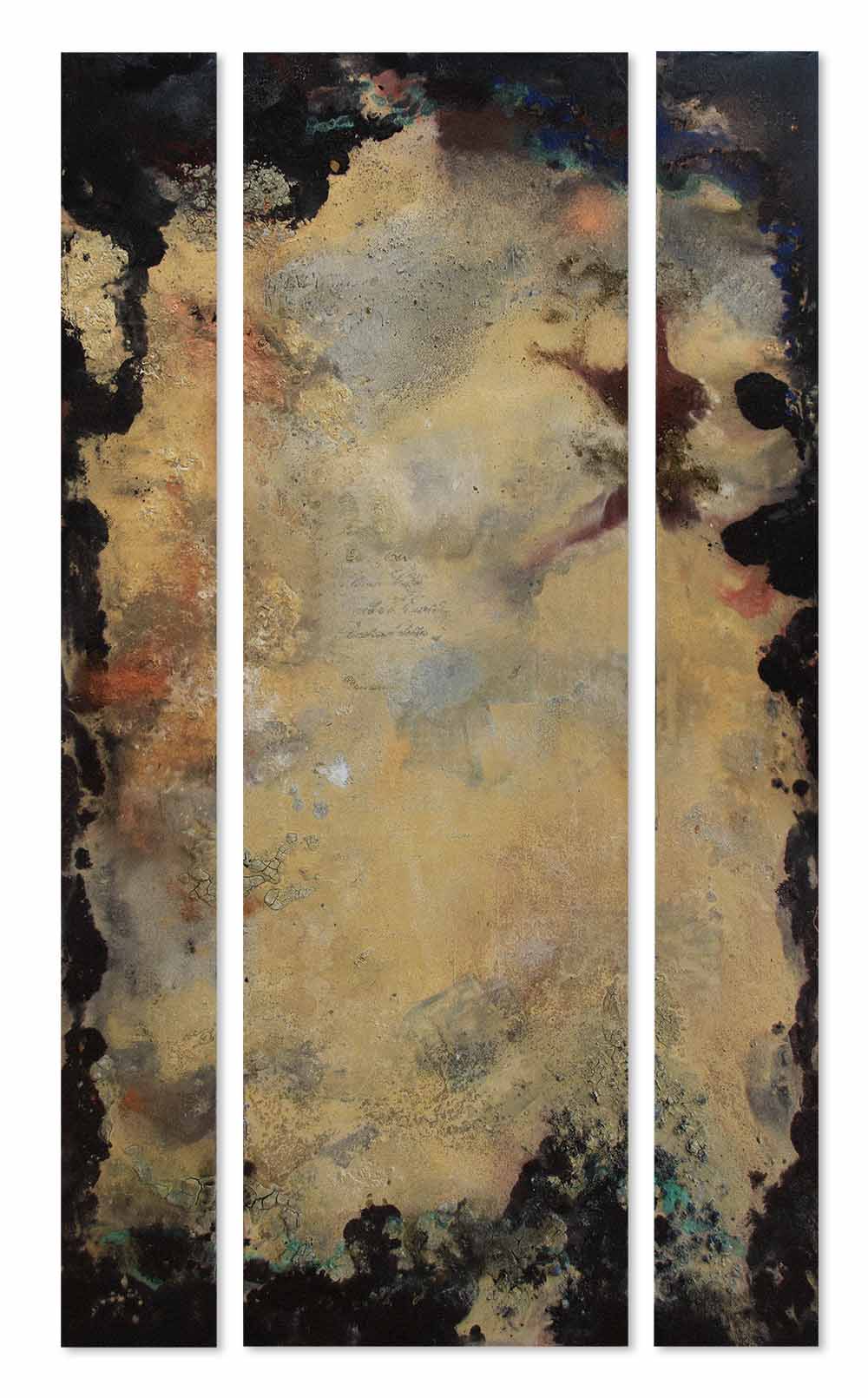 “In 2014 I happened upon the first strata geology map of England in the Geology Society in Burlington House, London. Through 2014 and 2015 I traveled along the cross sections and lines of enquiry William ‘Strata” Smith had made 200 years before. I travelled 10 000 miles to research early geological maps, cross-sections, geological columns and archives in the Geological Society in London, the British Natural History Museum and the archive in the Oxford University Museum, and museums in Wales, Scarborough, Devon, and Cornwall, the Ruhr valley and the Royal Forest of Dean.

During the late 1700’s, the Industrial Revolution opened up new worlds in mines and canals beneath Earth’s surface and beyond European shores. I realised that the colonial impulse was a scramble for new territory along with a hunt for ingredients for manufacture and minerals in foreign lands.” – Jeannette Unite 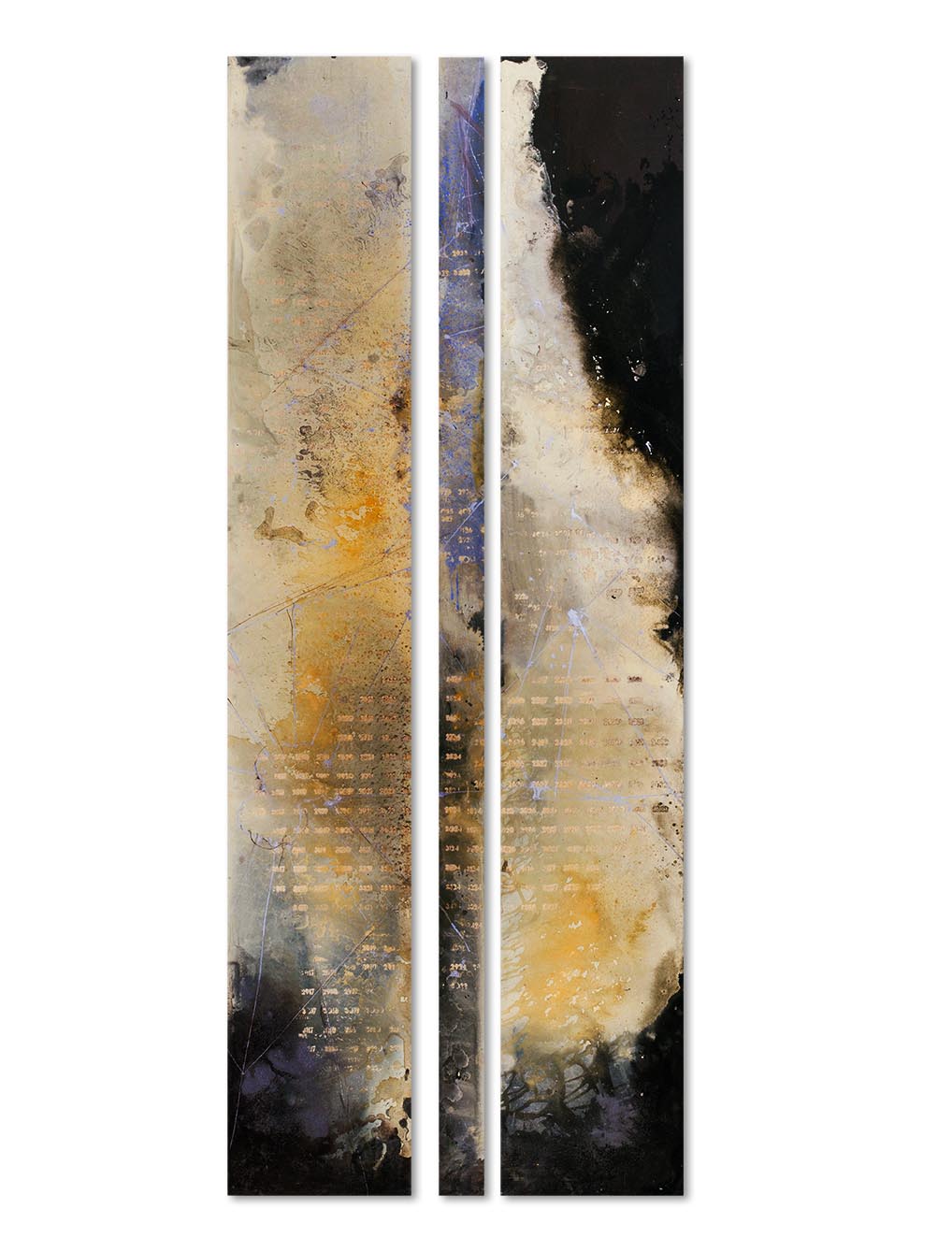 “The index for South Africa’s earliest aerial surveillance photographs were initially of areas where there are rich gold deposits. This included places such as Barbeton, Pilgrim’s Rest and Johannesburg and indicated to me that mining activities were surveyed for any changes in excavation. The Empire was keeping an eye on her colonized assets.” – Jeannette Unite

“Titanium is the most ubiquitous mineral pigment in the world. It is found in the white paint on our walls, in our make up and in my artists paint box. Thus titanium is also the first element that drew my attention to mining activity. I was living on African West Coast diamond mines, where heavy mineral deposits are washed up onto the Palaeozoic beaches along with diamond gravels onto the “oyster line” (identified by my great grandfathers friend, geologist Hans Merensky).” – Jeannette Unite 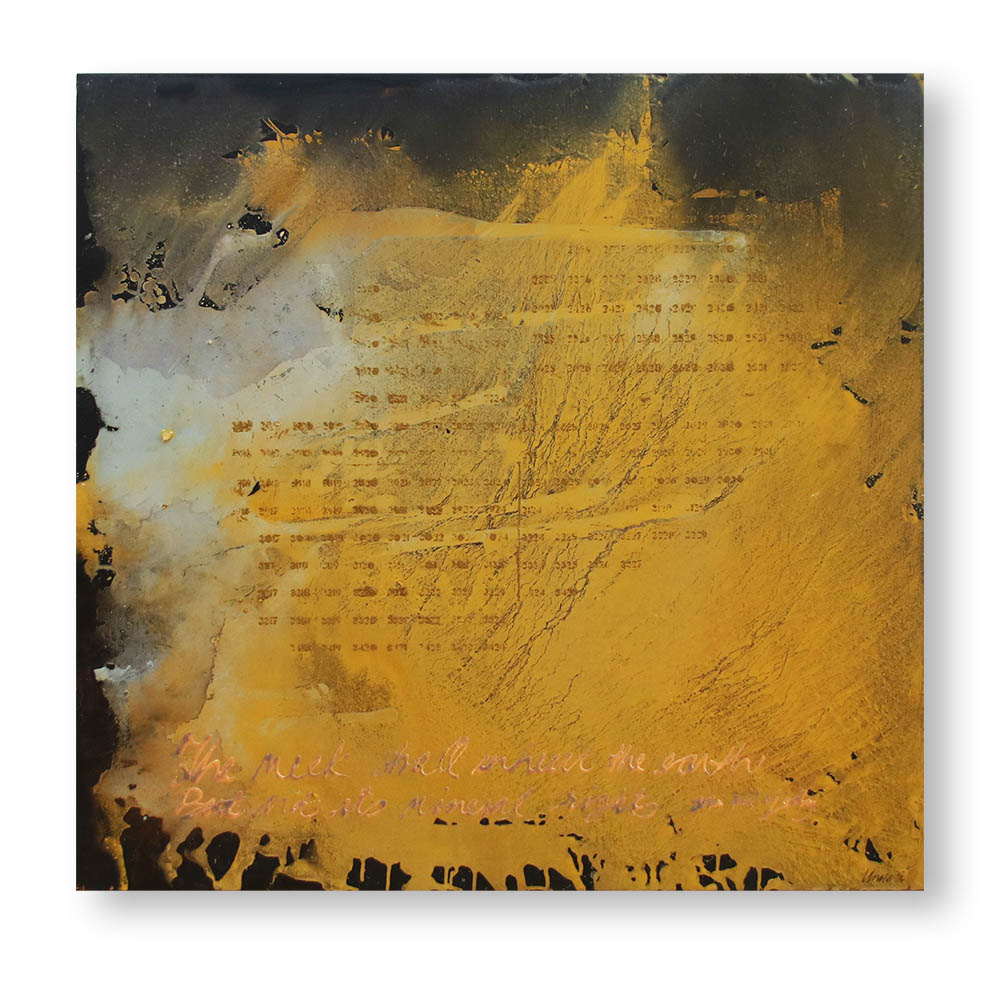 Jeannette Unite
The Meek Shall inherit the Earth, But Not the Mineral Rights
2015
Gold mine dust, iron oxides, mined metals in acrylic emulsion on panel
121 x 121 cm

“Owning, marking borders and laying claim to the spoils of any territory is at the core of all colonial conquests and legal systems. This is most often inextricably linked to the search for and exploitation of resources.

Cecil John Rhodes made this clear when he stated, “[W]e must find new lands from which we can easily obtain raw materials and at the same time exploit the cheap slave labour that is available from the natives of the colonies” (Brown, 2009:249). ” – Jeannette Unite 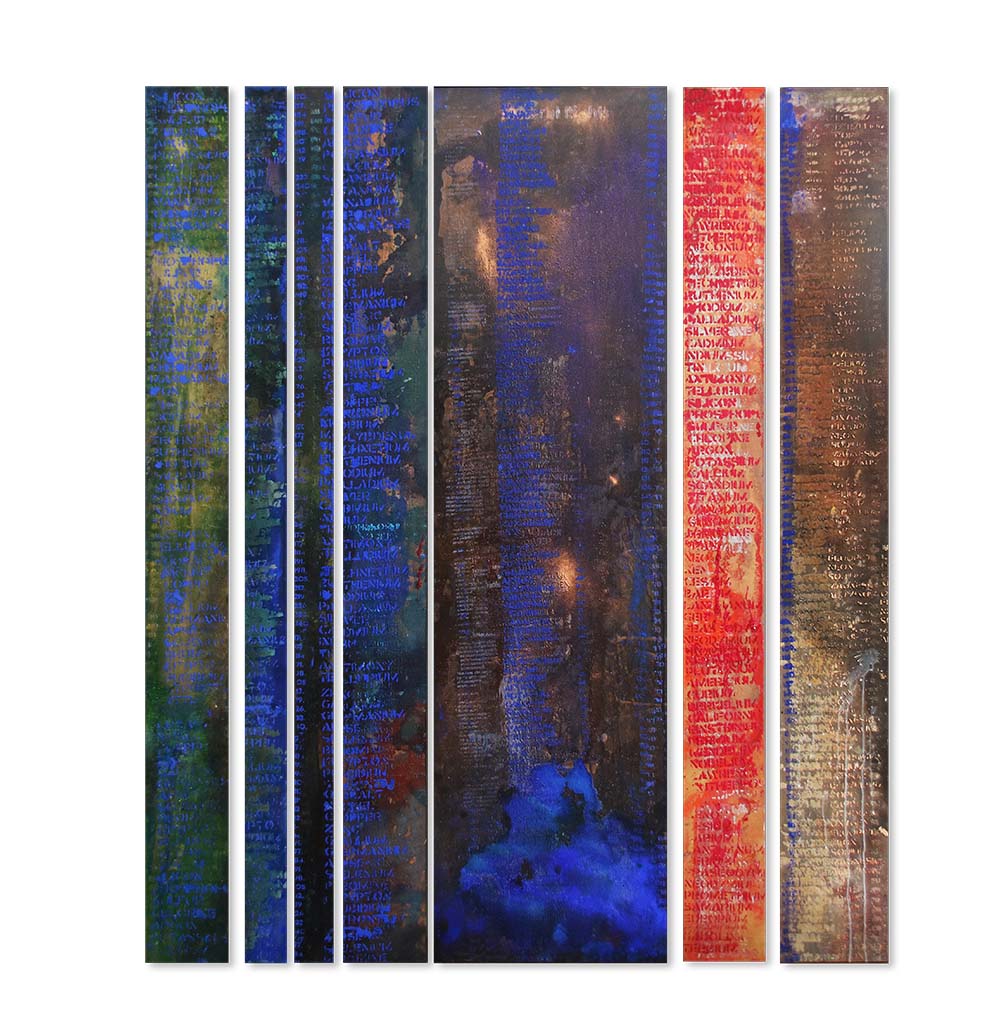 “I have mined for my paint box, using oxides, metal salts and residues from extraction, heritage and industrial sites, and have developed paint, pastel and glass recipes from the advice of geo-chemists, paint-chemists and a ceramicist to develop this ‘eco-alchemic’ work. These mining artworks are made from the very mined material they interrogate; the material is thus both subject and object in my predominantly large-scale art pieces.” – Jeannette Unite 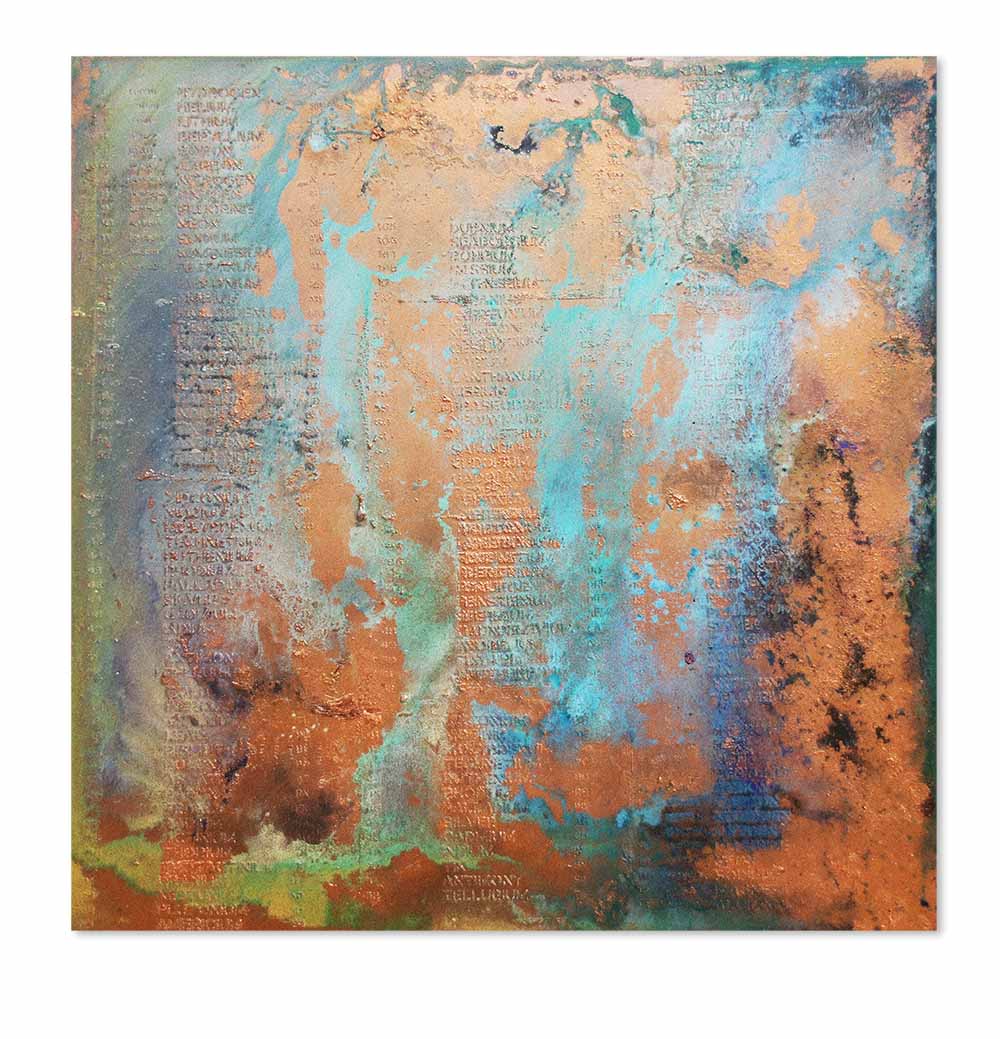 ”
Everything that is in our bodies is in and from the Earth. 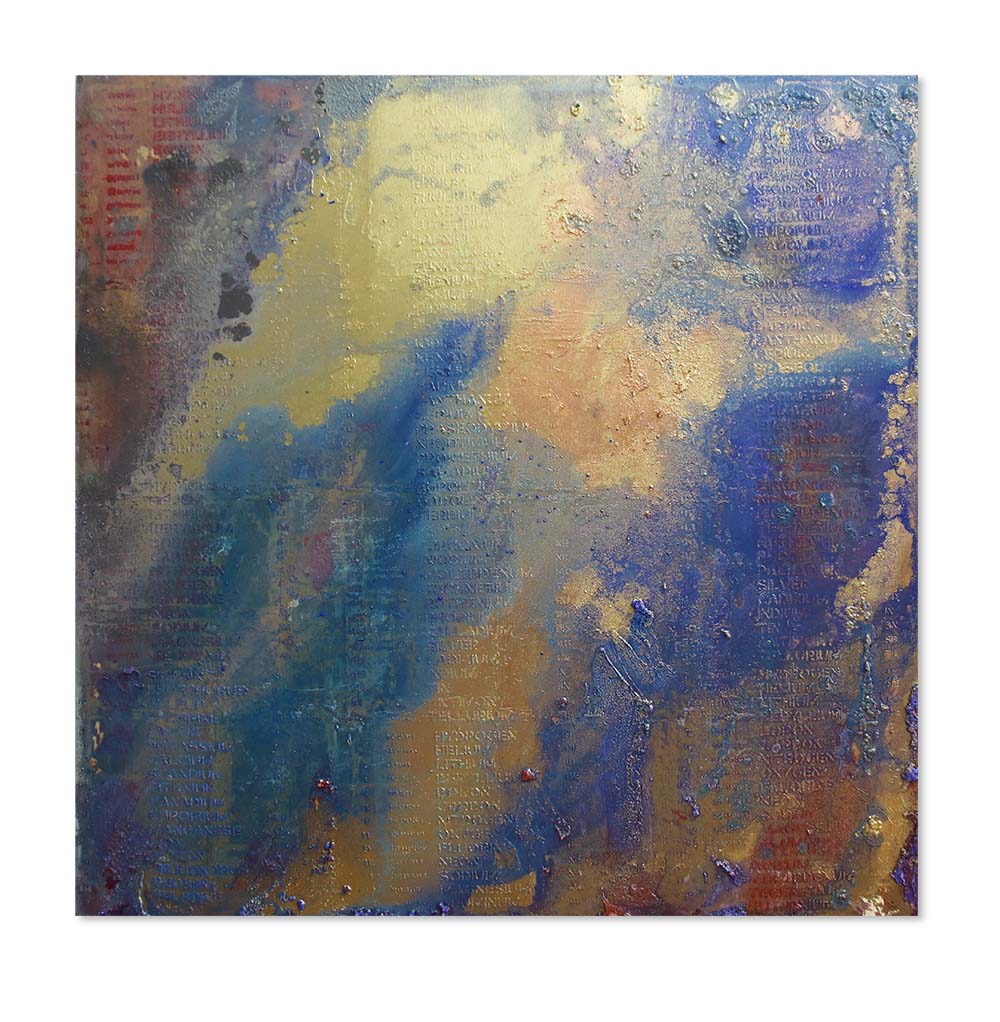 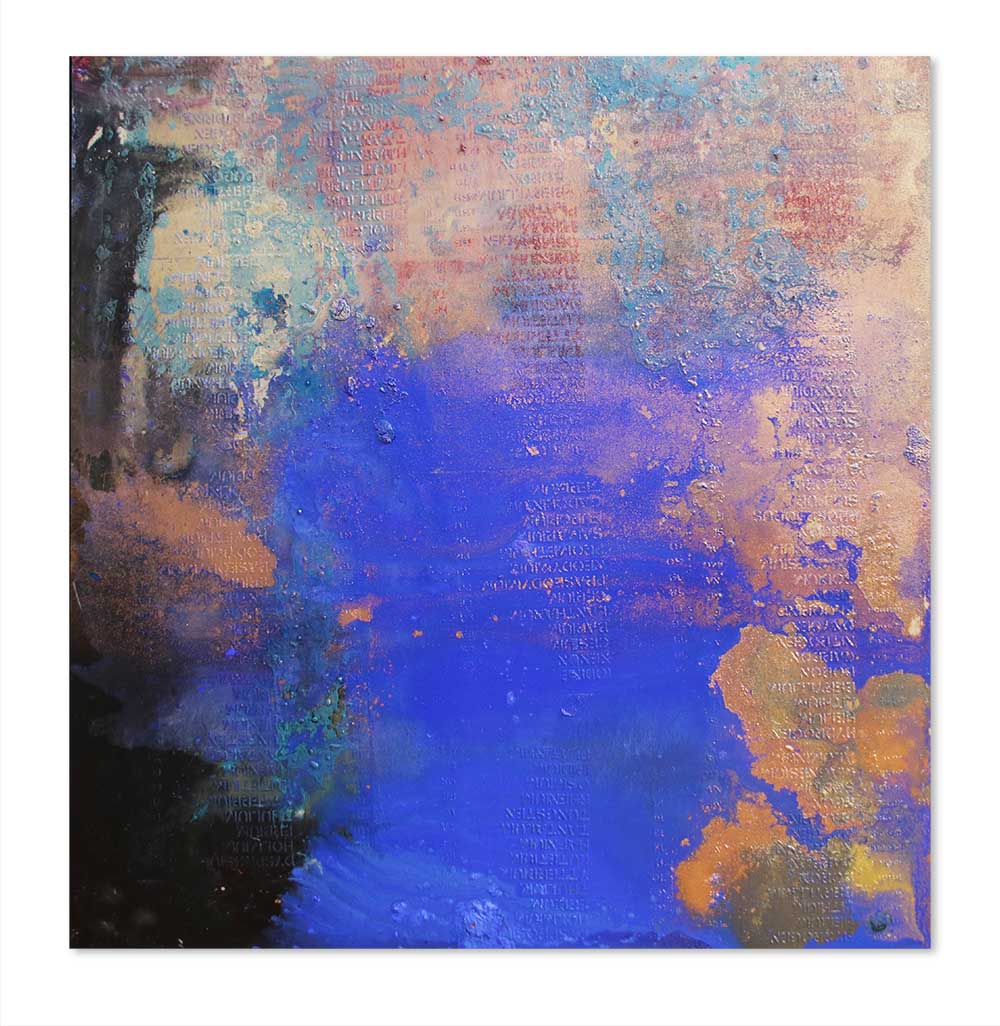 “Humans have an irrational love of inanimate matter. Our attraction to material objects springs from our curiosity to develop new technologies, which are among our defining traits, apart from our opposable thumbs. Modern human activity has, however, created a shift in the hierarchical balance among sentient, living creatures on Earth. This shift has contributed to environmental conditions preluding the 6th mass extinction on Earth.

The Age of the Anthropocene was announced at the 35th International Geographical Conference in September 2016. Earth scientists have agreed that humans impact on Earth is a scientific reality.

The Stone Age dependence on tools of stone changed when copper was first extracted 11000 years ago heralding the Bronze Age. This was followed by the Iron Age. In the past 250 years we have entered an age of multiple ore extractions and industrial revolutions.” – Jeannette Unite 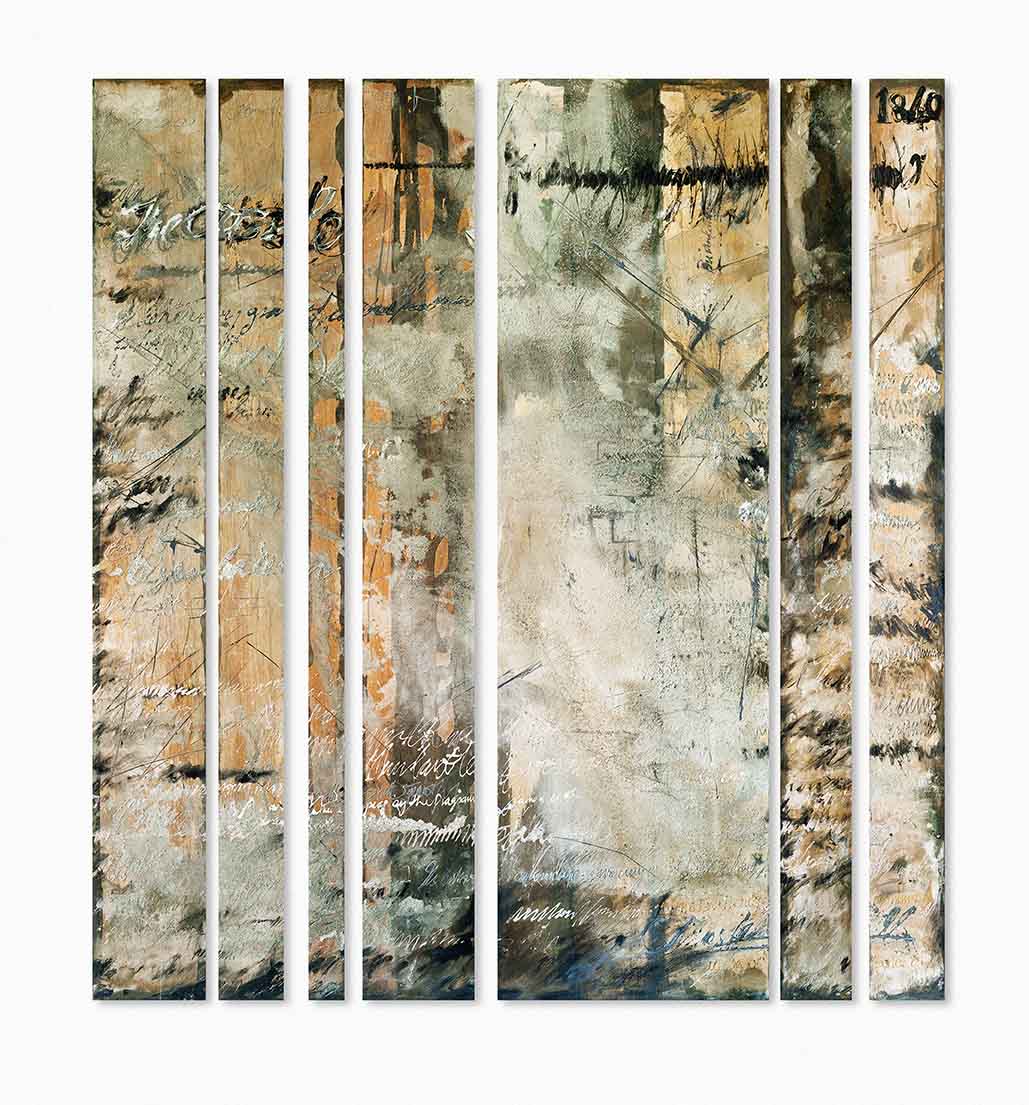 “The Castle at the Cape of Good Hope was the first settler construction in South Africa in the 1600s. This painting references the Title Deed from the deeds office archive. Erf 1, Cape Town is the harbour title deed where the first settlers would have landed on what was then a beach.” – Jeannette Unite 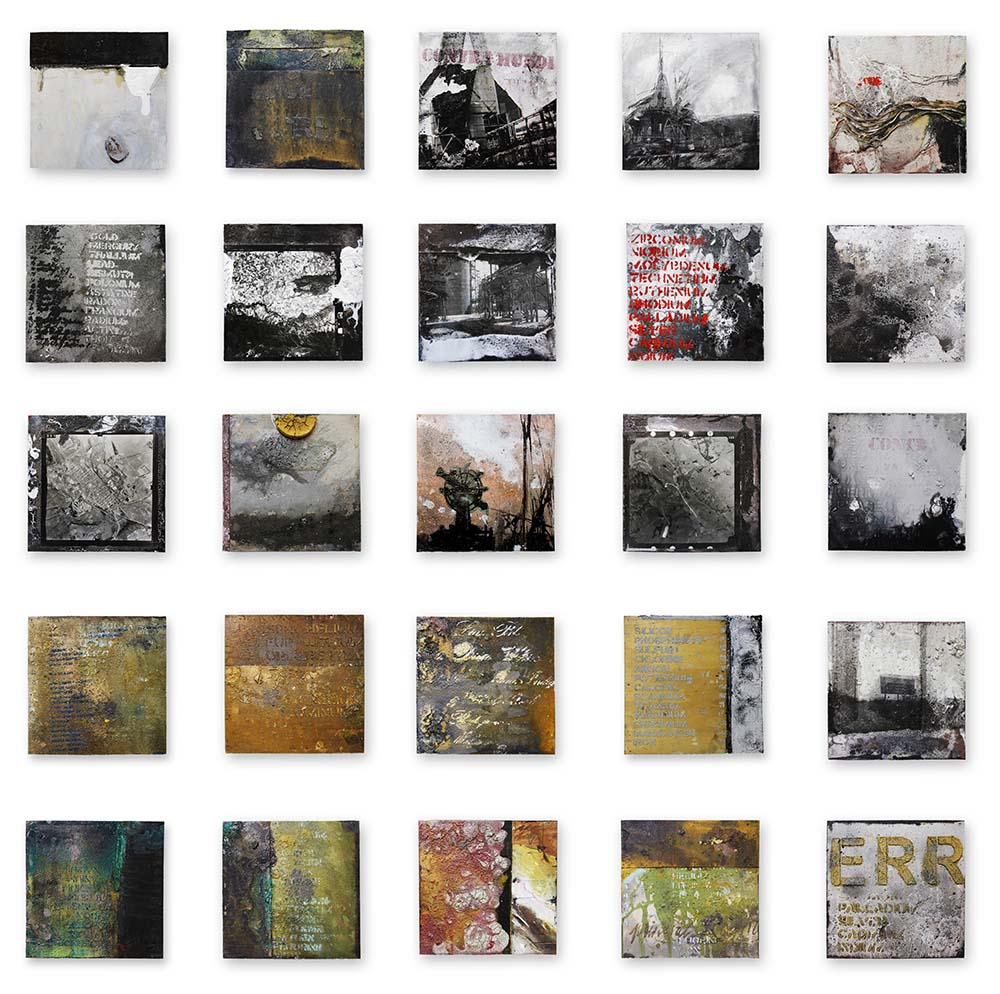 “Empires have dominated our world’s organisational systems. The foot measuring 30 x 30cm is a system for dividing and portioning the world’s surface. These panels reference the ruler (30cm or one foot) that measures in metric and imperial dimensions.